“I’m doing everything right. So why am I not losing weight?”

If you’re wondering why you’re not losing weight in your thirties or forties, I’m going to go through some things that could be going wrong. And I’ll show you how to get the results that you want.

The first problem could be extra calories sneaking in.

A lot of people have a fairly decent plan, so they might have a good plan for their breakfast. Something solid, a bit of protein.

Then lunch is a chicken breast and some vegetables or salad.

And then for dinner, they might even have a plan as well to have some lean meat veggies, some starch.

Maybe there’s a tiny dessert, but maybe not, but their general plan is kind of okay, but the problem is other calories sneak in. So that might come through snacking, whether it’s during the day, either in the morning, perhaps at work or in the afternoon and the most insidious time of all at night after you’ve eaten and you just got the munchies and you want to grab something else, people often think of their diet as being just what they planned for breakfast, lunch, and dinner.

And they discount all those extra calories that are coming in through snacks or little nibbles here and there.

Sometimes people snack on a muffin and they think because it’s a bran muffin, it’s going to be healthy. It’s got fiber, but that muffin may have three or 400 calories. Or you could be having a couple of granola bars each day as a snack. And actually if you put those granola bars together, they’re probably more than having just one chocolate bar.

I actually compared a popular granola bar, the nature valley bar, and it’s about 170 calories.

And you might have a couple of those each day and that would be 340 calories. But then if you look at a chocolate bar, let’s say a kit Kat bar, that’s got about 230 calories. 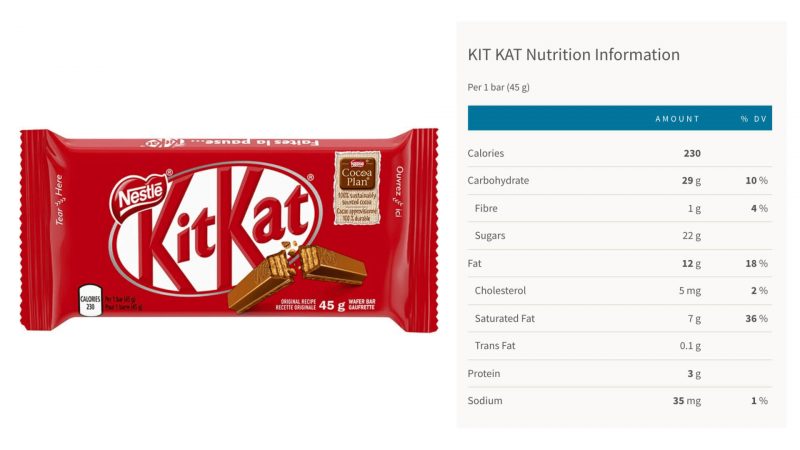 And the other thing is you might be forcing yourself to eat this granola bar.

You don’t really want it.

What you really wanted was a Kit-Kat.

And if you could have split that Kit-Kat and half you’d be better off than having those granola bars during the day.

Obviously there’s a little bit of difference in nutritional value. The kit Kat is a bit higher in fat, but there’s plenty of sugar in that granola bar. And it’s still not ideal necessarily. If you’re looking for weight loss, really weight loss is going to come down to whether you’re getting the right amount of calories.

How The Quality Of Calories Matters

Obviously the quality of those calories matter, not just for your health, but how your body processes them as well. So if your diet is higher in protein. Protein is a more thermogenic nutrient, and it takes more for your body to process it.

More fiber in a meal also affects how much your body absorbs. So more of those fiber calories are coming back out without being absorbed.

But the basics of energy balance remain the same. You can’t fight physics. Energy in and energy out.

You need to produce a caloric deficit in order to lose weight.

You’re Not Losing Weight Because You’re Depriving Yourself

Another mistake you could be making is that you’re depriving yourself.

So maybe you’ve got yourself on some sort of super strict diet plan, and you’re forcing yourself to eat clean.

I’ve got a whole video about why I don’t eat clean myself. So if you want to check that out and you might find that interesting as well.

But let’s say you’re really strict during the week. You’re just having protein and vegetables all the time. And then you kind of build up this craving for all those other things that you really enjoy. So maybe it’s chocolate, that’s my favourite personally, or ice cream or French fries or chips, all these things that you really wanted all week, but you didn’t let yourself have them.

So sometimes that kind of turns into overeating on the weekend, which is pretty common for a lot of people.

They do a really good job during the week, maintaining strict, perfect diet, and then they get to the weekend and all of a sudden they really want to have other things. And it’s not that you can’t have a more strict diet during the week and then indulge a bit on the weekends. But the problem is that most people overindulge so much that they’re negating all the progress that they’ve done during the week.

So you could be doing a specific fad diet that basically forces you to eliminate some things that you really enjoy. And you may be able to do that just through sheer will and discipline. But after a while, it becomes increasingly harder. So you may lose some weight initially, but then you’re going to find that that deprivation is going to cause you to focus more and more on those things that you want.

How To Deal With Food Cravings

What’s the solution for this?

I don’t force myself to eat it every day if I don’t want it, but I eat small amounts so that I don’t let that craving build up.

Think about this for any food that you have.

But I think of things in terms of chocolate, because that’s my thing.

The first couple of bites are really delicious and you’re really appreciating it. And then you get to the point where you’re right at the end and you’re not really enjoying it as much. So if you stop at say two or three bites. Or you give yourself only a few pieces, rather than eating the whole bar, you may be able to get over that craving and then move on and be able to have the next part of that bar the next day. Then you’re actually going to enjoy the chocolate more each time you have it.

Focus On The Pleasure Of The First Few Bites

Another reason why you’re not losing weight is you’re not getting enough sleep.

Now, I often talk about sleep at the end of a video and kind of tag it on. And then I feel like people aren’t paying attention. They’re just like, “Oh, okay, sure.”

Sleep pretty much controls everything else that goes into fat loss.

So we’ve talked about the nutrition. Sleep has a big impact on that. Not only is there a hormonal impact. So during sleep, growth hormone is produced.

Growth Hormone is associated with fat loss and muscle building as well. The hormone leptin, which causes you to feel full is produced during sleep as well.

Ghrelin, the hormone that’s associated with hunger is increased when you’re not getting enough sleep. So you’re basically, you’ve got everything against you.

And anyone who’s been really tired and then tries to follow through on their nutrition plan realizes what this is about because you just don’t have the same decision-making capabilities.

How Fatigue Impacts Your Food Choices

There’s that real “I don’t really care. I’m too tired. I’m just going to do what’s easy and convenient.”

And research has been shown that sleep restriction can reduce the amount of fat you’re losing. Even if your weight remains the same.

So you’re actually affecting how much fat your body is losing by not getting enough sleep. We all know that when we’re tired, we can’t be bothered to cook. We’re more likely to have high calorie takeaway foods or just convenience foods that we might have at home. You might end up on the couch just saying “screw it!” and down a bag of chips.

And you have less energy. So you don’t work out. And exercise helps you sleep better. So if you’re not exercising, then you’re not sleeping as well. And then it becomes this perpetual cycle that’s really difficult to get out of. So I always say, start with sleep. It’s the best bio hack for fat loss that there is.

Not Paying Attention To Portion Size

You don’t pay attention to portion size. Now it’s very important when you’re eating and managing your calorie intake that, you know, approximately what you’re eating.

The research shows that we tend to underestimate what we’re consuming. So even if we have a slight awareness of calories, we don’t actually have a very good idea of what they truly are.

If you’re eating a lot of restaurant or takeout foods, then a lot of those foods contain enough calories for your entire day. Just because portion sizes, particularly in North America, are getting larger and larger. You’re consuming much more than you should.

Normally if you order a takeout, try to split it in half and only have the first half. Now save the other one for a later meal. Then it’s more likely to be the right number of calories for weight loss.

You’re Not Losing Weight Because You’re Not Moving Much

Another reason you might not be losing weight is you’re not moving much.

A lot of us are trapped behind desks most of the day, and we don’t get up a lot. And this is missing out on a lot of potential calorie burn.

It’s also very unhealthy to be sitting around for long periods of time. When we look at our total calorie expenditure over the course of the day, this is referred to as neat non-exercise activity thermogenesis. And it doesn’t make up a huge amount. It’s maybe 10 to 15% depending on the individual, but it is a good way of increasing your calorie expenditure on a day to day basis.

And as I said, there are health benefits as well to avoiding sedentary behavior.

You’re Not Losing Weight Because You’re Relying On Exercise

You’re relying on exercise. I believe strongly in exercise. Obviously. I think it makes you feel good, more energetic. It makes you feel stronger. It also has a host of health benefits shown in the research, the ability to reduce your blood pressure, your cholesterol and insulin sensitivity. However, exercise is not actually that effective for weight loss because exercise doesn’t burn as many calories as you think, forget about what you see on those cardio machines at the gym, because those are always overestimating how many calories you’re burning.

Which is why if you’re relying on exercise too much, it might not be effective for you.

It’s actually been found in the research that a lot of people, when they introduce exercise, they tend to eat more. And then they’re pretty much compensating for the calories that they’re burning off through exercise.

So if you’ve been trying to use your workouts to get away with eating a certain way, then it’s probably not going to work out for you.

Nutrition Makes About 90% Of The Difference

I used to say probably about 80%. So 80% is going to be nutrition and 20% is exercise and lifestyle.

So do you think any of those might be the reason why you’re not losing weight? Leave me a comment and let me know.