Do you want to learn how to activate your TVA?

Watch this video and I’ll show you how to get proper TVA activation to flatten your stomach and protect your lower back.

hi, it’s Ivana helping you get fit, healthy and strong at any age.

Those are the innermost abs.

Many people think of it as the lower abs, but it’s actually the muscle that’s deeper inside. It’s larger than most people think: 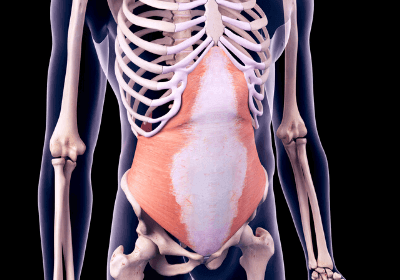 It runs under the ribs and also along the iliac spine. So the hip bones that you’ve got there. I’ll show you three ways of getting the TVA activation so you can find out what works best for you. At the end of this video, I’m going to tell you how to speed up your results and make these TVA activation exercises even more effective.

So we’re going to start on the floor with the most basic TVA activation, the pelvic tilt exercise.

I want you to lie down on the floor with your knees bent and now you’re going to feel for your hip bones at the top, what we call the ASI ES. And then you’re coming in about two inches. That’s going to move my hands so you can see that and then down an inch, and that’s the area I want you to feel it from both sides so you can do it.

What you’re going to do is pull the muscle in towards the spine, so you’re drawing your belly towards the spine. Just pull it in and you should feel that muscle popping up under there if you push down hard.

We’re going to do it with a tiny bit of it’s pelvic tilt, just a little bit of movement, just enough so that you feel that muscle pop under there and then you relaxed. So you tighten it up, pull in, pull in at the same time you’re squeezing and then release.

Try not to move your hips too much. We really don’t want a big movement. Just a very small movement squeeze.

and then release. So just about three seconds and you’re going to do two sets of 10 reps of this one.

The next one is a draw in maneuver.

For this one you also want to pull in the lower abdominals towards your spine as hard as you can.

We’re just going to try to hold this one for a little bit longer. If 10 seconds is okay for you, great. If 20 seconds is possible, that’s really what you’re aiming for. For this one.

So I’m going to show you how it’s set up, hands and knees, but I don’t want your hands to be too far out. Just keep them fairly close to the knees and then tuck your toes under just to give it a little bit of stability there.

And all you’re doing is the same pelvic tilt as before.

You’re doing a squeeze and then relax. You’re just pulling up so you can do a tiny bit of an action here just to so you feel the lower back. Start to release a little bit. That position there with the hold. Squeeze, breathe all the air out. Keep it super flat and then release.

It doesn’t seem like much when you’re looking at it. But if you do two sets of 20 seconds for this one, you’re going to feel the TVA activating pretty well.

The last one is the stomach vacuum exercise.

The principle is pretty much the same but it’s a little more challenging because you’re in the standing position.

That wasn’t 30 seconds yet it’s just a short one. But that gives you the idea, really tighten it up. Hold for as long as you can, and that should really activate the TVA.

So let me know in the comments which of these TVA activation exercises works best for you.

And now here’s my tip for getting faster results:

Do these TVA exercises every other day.

But then I also want you to practice a simple TVA activation a few times a day, every day.

This really strengthens the neural connection to your lower ab area.

You’re going to set up a trigger, something that you do a few times a day and your practice squeezing the TVA for just 10 to 20 seconds while you’re doing this activity or just after.

It could be brushing your teeth or just going to the washroom, or if you’re really keen, then you can do the TVA squeeze every time you wash your hands. Do this for two weeks along with the TVA exercises that I’ve shown you, and I’m sure you’re going to notice a difference in the tightness in your lower abdominal area.

Come back here and leave me a comment and let me know how it worked for you.

I hope you enjoyed these TVA activation exercises.

My upcoming videos are also going to be more TVA exercises, so we’re going to hit the abs.

Make sure you’re subscribed so you get notified when those videos are released.

Thanks for watching and I’ll see you soon.

How Stress is Preventing Your Fat Loss

How To Re-Launch Your Motivation