Have you got tight hips?

I’m going to take you through a hip mobility and flexibility routine to get them loosened up.

I’ve already done a hip mobility video, but it was a bit advanced to help people get to the splits. This one is aimed at people who have tight hips and don’t have much flexibility. I’ve included hip mobility exercises as well as hip stretches.

And the last stretch is my favourite for stretching up the psoas, one of the hip flexor muscles.

If you’ve had a hip replacement or you have a hip injury of some type, make sure you check with your doctor and your physical therapist, to make sure that these exercises are right for you.

We’re going to start off standing to get the hips warmed up. So you’re going to put your hands on your hips and then rotate the hips around. So you can do about 10 to the left and then change direction.

And now we’re going to move on to single leg hip circles. I find this easier. If you hold onto something, then you can actually get the rotation. And you’re just going to rotate the leg around pretty small circles to start off with. So about 10, right?

And then 10 in the other direction. You also want to do this with the other leg, 10 going to the left and 10 going, right. Make sure you do both legs about equally, unless one of your hips are a little bit stiffer. So if your right hips a bit stiffer, do a little bit more work on the right side.

So we’re going to stay standing for the front leg swings. So just lift the foot and then swing it forward and back just small, small emotions.

If you’re more comfortable, you can do this supported. The only difference is you’re probably gonna feel the stabilizer muscles on the left-hand side. So the opposite one, and it’s going to warm them up a little bit quicker. Plus, you’re going to be practicing your balance as well. Whereas here you won’t as much.

But the idea is to get the hips warmed up and then more mobile. And again, you’re going to switch this over and do the other side gently forward and back.

One more exercise in the standing position, again on a single leg, sweeping the foot across the front, same thing on the other side and cross the leg. That’s up in front of the other leg.

Now I really liked this one with support. You can come across and get a bit more of a full range, but that might be a little too intense if you’re not that flexible. So you can still just a little bit. A little bit of movement. Some small leg swings, and then change it up.

And I definitely want you to use support. So you’re going to bring your hands down in front. And then you’re just bending the knee and making small rotation. So about 10 in one direction and then 10 in the other direction. And then switch over and do the other leg.

So now we’re going to bring it to the floor.

We’re going to start off with butterflies. Bringing your feet together and then gently just move those knees up and down. So if you’re not that flexible, you might be way out here and just trying to pull it out. 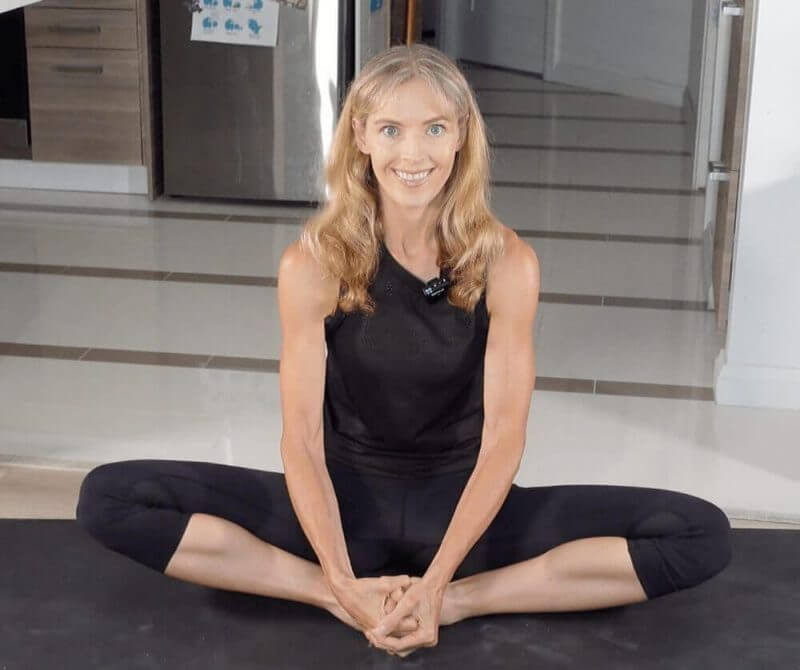 If you can pull it in closer to your body, and then you’re going to pause and do the stretch.

So you’re going to push it down wherever it’s comfortable for you.

You can even apply a little bit of pressure with your elbow. And you can hold this stretch for 20 or 30 seconds, maybe two or three times, depending on how much you want to work on this particular position.

You can also switch it up. So you’re just mobilizing one side. If you really want to work on one leg, one hip (a little bit of hip mobility here) and then try to bring it back again to the center.

So now you want to get into a half kneeling position. I’ve got a pillow here underneath my knees, so it’s a bit more comfortable. And then the other foot is flat in front. And we’re going to start off with just a bit of a mobility exercise, just rocking. A gentle hip rock.

Be very careful and just to go in your own range of motion. Don’t push it too much. You never want to feel any strain in your back during this exercise. Just keep it very gentle and you can stop and then bring it forward.

Bring the hand down and just hold this stretch. You want to hold this for about 20 to 30 seconds. You can do this a couple of times and then switch over to the other side.

So again, starting off with just the mobility exercise rocking forward and back. And then lean forward a little bit, bringing the hand down. Then just hold this stretch there.

Now you’re going to bring your feet flat and front bend the knees. And then one at a time you’re going to drop the knee inward and then switch. So you’re just rocking the hip.

Once you’ve done about 10 on each side, then you can actually push this one out. You’re bringing that one in and bringing the other leg out and then all the way. So you’re fully rocking from side to side, keeping the knees bent for both legs. So you can do about 10 of these as well. Probably a couple of sets.

Now we’re going to bring it around. One ankle comes on top, just over top of where the knee is. Don’t put it right on your knee because that’s going to hurt. And you’re doing, what’s called a figure four position, just kind of creating a four there. And that’s going to stretch at your glutes.

And then after you’ve held for about 20 to 30 seconds,

Pull it down, bring the other leg on top the other ankle and just

Hold there again. 20 to 30 seconds for each one, you might want to do a couple sets of this one.

This one, you can also do lying down.

So one leg comes over and then you can pull through. Some people like this position, it’s a little more comfortable.

You can kind of relax into this one a bit more, hang out, of course, switch.

So this is my favourite stretch for the hip flexors. Sometimes it’s called a couch stretch because you would do it on a couch right now. I’ve got a bench here. And what you want to do is bring the foot up against your couch or against your bench.

And you definitely want to have something underneath that knee. So it’s a bit more comfortable. The other foot comes up flat and it’s pushing forward. Like we did with the hip mobility movement. We’re going to come back and try to keep it straight up and down. So you’re actually stretching the muscles a bit better here. And you’re going to squeeze the glute on that side and just bring it forward. So you’re really going to feel it here. Sometimes it doesn’t take much of a squeeze to feel now, of course, if you’re not that flexible, you can have this way out,

But once you get a bit better, you want to get closer and closer to your bench or to your couch. And then you still want to do the squeeze and keep this upright as much as possible. So that really gets in there and then come straight up, back straight. You probably want to do a couple of sets on whatever side is tighter.

You’re going to switch it over. Be careful with the switch as well. It’s a little bit awkward sometimes. So be careful coming down. You want to squeeze that glute so you can feel the stretch at the front of the hip.

Please hit the like button if your hips are feeling a bit better now.

Go After The Body You Want NOW

Why Age is an Attitude

Can Donuts Be Part Of Your Nutrition Plan?

Mindful Eating Tips To Change Your Relationship With Food