There’s a lot of misinformation in the nutrition world.

In this video, I’m going to take you through the nutrition myths that have been debunked by science.

One of the things that I’ve really enjoyed doing is helping people see through all the headlines and all the fear-mongering.

I’m going to start with one that’s still very prevalent and there’s an entire lifestyle built around this.

The first of the nutrition myths is you need to eat clean.

Now, the first problem with this is that there’s no real scientific definition of what clean eating is. People have an idea of what it means, but even those people who pursue clean eating are always sure and different people. Following clean eating have completely different rules.

Some people don’t eat meat and they consider meat to be unclean. Some it’s just processed foods and you can’t have any processed foods in that version of clean eating. Sometimes it’s avoiding things like gluten or dairy unnecessarily, because unless you actually have a gluten intolerance or you’re celiac, or you have lactose intolerance, there’s no need to avoid gluten or dairy.

Food is not clean or dirty.

Yes, highly processed refined foods are not as good for you on a regular basis. And if your entire diet consists of those types of foods, obviously it’s not healthy. 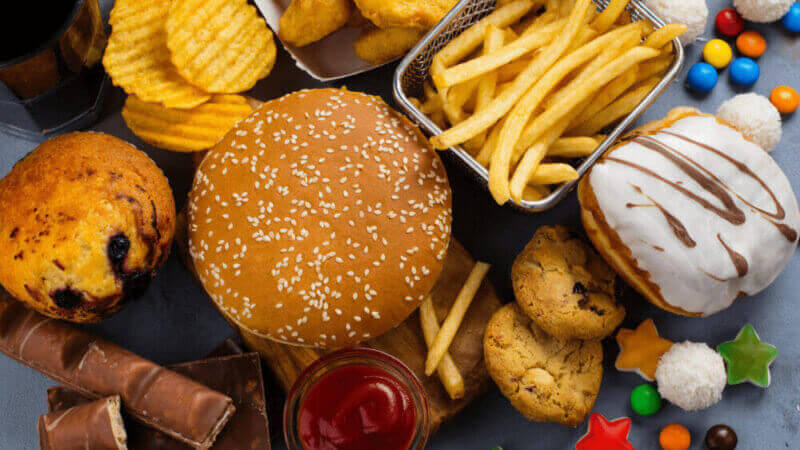 So don’t get me wrong. It’s not that I’m saying don’t eat vegetables and don’t eat lean proteins.

Processed Foods And Your Health

But that doesn’t mean that having a little bit of processed foods is an epic disaster.

For some people, clean, eating can even be dangerous. It becomes an eating disorder where they’re afraid to eat certain things. It actually can lead into a disorder called orthorexia. Any type of eating disorder is something that we want to take really seriously. An unhealthy obsession with food is an eating disorder. I’m not saying that clean eating automatically leads to that, but for people who are predisposed to that type of disorder, it may very much be a trigger.

The next myth is that eating frequently boosts your metabolism.

So everyone wants a faster metabolism, right? Sounds like a great thing.

When you’re burning more calories and the digestion of food does burn some calories.

Nutrition Myths 3 – You Need To “Detox”

The next myth is that you need to detox. Now this word gets thrown around so much and it becomes very frustrating from a scientific standpoint, toxins are plant or animal based substances that are poisonous to humans. And yes, there are a lot of them around in small quantities.

And this is partly what people don’t understand. When they’re talking about toxins, they get very frightened, but some of these things are in small quantities in the air everywhere. And our kidneys, your liver, even your skin, those things help to detoxify your body on a regular basis.

It’s taking in anything that the body deans to be poisonous and eliminating it out through various way. So through urine feces and even respiration.

Sometimes people use the word detox and it kind of casual way.

“Oh, I’ve been eating a lot of junk food and drinking a lot. So I need to detox.” and that doesn’t bother me at all. That’s a perfectly fine way to talk about it.

It’s a poison to your body. That doesn’t mean you can’t have it.

What a lot of nutrition, gurus and influencers try to sell you is that you need some sort of special detox concoction to clean your organs or something like that. It’s completely unnecessary. The only thing that they’ve been proven to do is clean out your bank account.

And in some cases they’ve actually been found to contain things within them that are harmful to people. So it’s best to avoid those kinds of detox, juices they’re overpriced and unnecessary, potentially dangerous.

You may actually lose weight on one of these detox, cleanses juice, fasts, or whatever you want to call them, but you’re only losing it because you’re drinking a very small amount of calories for a period of time. And as soon as you go back to eating, normally you’re going to put that weight right back on.

So what’s the point?

Nutrition Myths 4 – Protein Is Bad For You

The next of the nutrition myths is that protein is bad for you. Now, there are two things you might’ve heard.

The first is related to kidney function that too much protein is bad for your kidneys. This came about because people with kidney issues do actually have a hard time processing protein and it can be harmful for them.

However, research on people with normal kidneys show that we can handle plenty of protein and it’s not harmful. You will be losing the protein because your body processes it. So it’s measurable as more protein in the urine, but that’s not shown to be harmful.

The other thing that you might’ve heard is that protein promotes bone loss. And of course that’s not something we want. So in most cases, when they’re studying the protein, it’s a calcium source or a dairy source. And if you take in more calcium, you tend to excrete more calcium as well.

It doesn’t mean that it’s necessarily coming from your bones. Most of what we’ve seen is that extra protein has either a neutral or even a protective effect on our bones. If you don’t have a preexisting condition, then there’s no reason to be worried that protein is going to harm your kidneys or your bones.

Nutrition Myths 5 – Carbs Are Bad For You

The next myth is that carbs are bad for you.

Now I don’t like to label anything as completely good or completely bad when it comes to food. We know that a higher intake of refined carb foods is probably not beneficial to our health longterm, but it’s a matter of quantity and quality as well. Carbs are found in lots of nutritious foods. Those are the ones that have lots of micronutrients. So fruit and vegetables, certainly you don’t want to reduce your intake of carbs from those sources because there are a host of health benefits that are coming from those types of foods.

Sugar also gets a very bad rap. It’s not that you need to completely eliminate sugar from your diet in order to be healthy.

Some sugar is okay. It does provide you with energy and some carbs sources also contain fiber, which we know to be beneficial for your health.

So classifying carbs as bad isn’t really helpful, not for your health and not for weight loss. Obviously if you over consume carbs, then it may be an issue for weight loss. And it may also create carb cravings, which can cause you to overeat.

Too much of anything is going to become a problem. And I don’t like to use the term moderation, but yeah. A healthy person should be able to consume some carbs, even some processed carbs.

Our next myth is that fresh food has more nutrients.

Now we often kind of looked down on canned foods because they tend to be highly processed. And there’s a lot of stuff added. Sometimes it’s sugar or sometimes it’s oils. And yeah, that’s going to affect the nutritional value of the food.

But when we compare fresh foods compared to frozen, especially if it’s plain frozen, without any sauces added, there’s really no difference in terms of the nutritional value.

In fact, sometimes the frozen food can be higher in nutrients because it’s picked at a time when the nutrients are high, whereas fresh food might’ve been stored for a period of time and you will lose some nutritional value in a food over time.

Cooking And The Nutritional Value Of Food

Cooking is a form of processing as well, and it affects how your body absorbs those nutrients. In some cases, cooked food is actually better.

You’re going to absorb beta carotene for instance, from carrots, much better. If it’s cooked than if you have raw carrots and lycopene from tomatoes is better absorbed in a cooked form, like a sauce than it is from a raw tomato. So fresh is not necessarily better.

Nutrition Myths 7 – If You Want To Lose Weight, You Can’t Eat Late At Night

Now there’s a perception that if you eat foods late at night, particularly carbs, you’re going to put on weight.

What happens with a lot of people is that they’re eating the right amount of food during the day.

And then at night they might develop some cravings and they’re eating a lot more. So it’s not the fact that they’re eating it later in the day. That’s a problem, but a lot of people have issues with late night eating and late night cravings, and that can make it difficult to maintain weight loss.

Our metabolism does start to slow down a little bit in the evening. So theoretically we would be burning fewer calories at that time, but we’re talking about such minuscule amounts that for practical purposes, it doesn’t matter at all.

So if you’re eating a doughnut late at night, it’s not going to be very different from eating a donut early on in the day.

I hope this helped. Please leave a comment if you want any clarification.

Why Yoga isn’t the Way to Get Lean

Increase Hip Mobility To Do The Splits

The Best Workout For A Lean, Athletic Body