Not Losing Body Fat? Five Mistakes You Could Be Making

Are you trying to do all the right things, but you’re not losing body fat?

In this video, I’m going to talk about the five mistakes you could be making that are keeping you from achieving your goals.

And no, it’s not because you’re too old to lose weight. I have some very strong feelings about that.

It’s not because your metabolism is damaged.

And it’s not because you have bad genetics either.

Although, of course, it’s easier for some people to lose weight than others. But that doesn’t mean it can’t be done.

Eating Too Many Calories

It doesn’t mean that you need to track and monitor your calories.

And I’m going to talk about that a little later as well. You’ll always have to expend more calories than you take in, in order to lose body fat.

That doesn’t change the fact that there are tons of things that can affect how many calories your body is burning off apart from just the amount of food that you take in and what you burn off with exercise. But that doesn’t mean that the basic principle doesn’t apply.

People tend to underestimate how much they’re actually eating.

And there’s lots of research that backs that up.

If you’re tracking your calories with an app, like myfitnesspal, then you need to be as accurate as possible with what you’re eating.

Most people are not good at eyeballing things, and it’s not that easy to do. So that’s why it’s important to actually weigh and measure. Then you can try to get the closest estimate that you can for what you’re actually eating.

That means you have to be very careful about including everything that you eat. So even if you’re finishing off a little part of your kid’s dinner. Or you’re just having a little bit of ice cream. Maybe you’re adding a little bit of olive oil to your salad. You need to add that to your calculations or you won’t be accurate.

And it’s very easy to miss all the little things. Maybe one of those things won’t matter. But when they add up over the course of the day or week, you’re talking about the amount of calories that could prevent you from losing body fat.

Not Attempting To Track Anything

Now, the second mistake is not attempting to track anything at all while monitoring your calories, isn’t necessary to lose body fat. It’s certainly helpful to at least educate yourself about the approximate number of calories that your favorite foods have.

A lot of people assume if they just eat whole foods or they just eat healthy foods, then they’re going to be okay. But that’s actually not the case.

Just that one tablespoon of peanut butter is close to a hundred calories and it’s so easy to eat that peanut butter. Isn’t it. One tablespoon just doesn’t feel like enough. Any oil, even the healthiest of extra virgin olive oil is 120 calories per tablespoon.

So if you’re just kind of freewheeling it and throwing on as much as you feel like having, you could easily throw on 300 calories without even knowing.

While your diet should consist of lots of healthy whole foods, you do have to be mindful of the calories that they’re adding to your plan. And if you’re not tracking anything, how are you going to know how much you’ve been eating? How many calories is your maintenance level and how many calories you need to lose body fat?

Relying Just On The Scale To Monitor Progress

The third mistake is relying just on the scale.

For most people the scale is a good rough guideline for your progress. Especially if you’re 30 or 40 or 50 pounds from your goal, you should see a fairly steady decrease in your weight from week to week.

However, once you get a little bit closer to your goal and say, you only have 10 pounds to lose, or maybe you’re just looking to get a bit leaner, maybe put on a bit of muscle, things are a bit trickier.

Your weight goes up and down for various reasons and not all of them have to do with the amount of body fat that you have and what could be happening. Particularly if you’re a beginner or you’ve taken a break. And you’re just getting back into exercise again, is that you could be going through a body recomposition. And this is when you’re putting on muscle and decreasing your body fat stores at the same time.

That’s actually what we’re aiming for.

This is why you should have other measures of progress to look at as well.

Besides just the weight on the scale, you can take progress pictures.

You can take measurements like your waist, hips, even your arms thighs, whatever’s most important to you and where you think you’re going to see the changes the most.

You can also check how your clothes fit. So if you’ve got some tight clothes, you can monitor how you’re fitting into those clothes over time. And that’s going to give you an indication of your weight loss progress and how much body fat you might’ve lost.

The next mistake is overestimating your energy expenditure. A lot of people think that that workout, that they’re doing a couple of times a week, maybe three or four times a week is going to result in a lot of fat burn. Now, the devices and machines that give you information about calorie expenditure are notoriously inaccurate. They overestimate how much you’re actually sleep burning off.

Keeping Track Of Body Fat Loss With One Variable

So when I work with my online coaching clients, I give them a plan for their workouts and their physical activity, but I ask them not to enter it into my fitness pal and not to record it in that way, because those numbers are likely an over estimate from what your body is actually burning off.

And you could get a little bit too excited and think you have space for more calories because both calorie intake and calorie expenditure are just rough estimates. It’s easier to rely on one measure in this case, the calories that you’re taking in.

There’s less room for error if you’re just tracking the food that you’re eating and the drinks that you’re taking in.

It’s good to have a record of the workouts you’re doing and the physical activity that you’re included, but you’re focusing on your calorie intake. If you’re not seeing changes, it’s easier to make adjustments in your calorie intake and then just keep your workouts regular. Then you’re not playing with too many variables at once.

And the last mistake you could be making. I think this is probably the one that most people completely forget about is not moving enough. So a lot of people are focused on their exercise and their nutrition, but they forget that those daily activities that they do add up your total daily energy expenditure consists of your RMR.

That’s your resting metabolic rate. Plus the any exercise that you do plus the thermic effect of food because digesting food actually does take some calories. Plus neat. 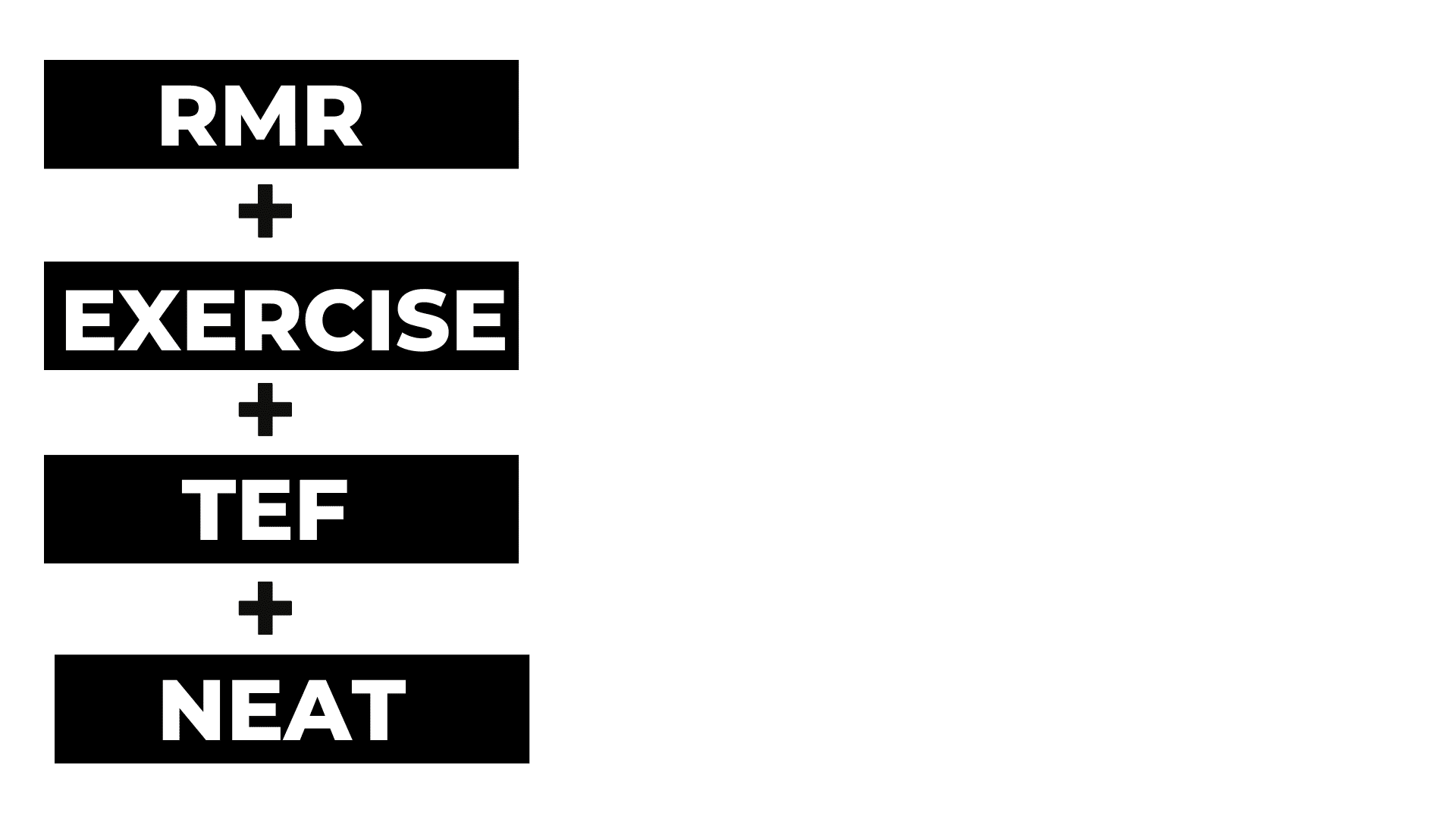 Now, NEAT, which is non-exercise activity thermogenesis, is what your body is burning off through the day through just normal movements.

If you’re very active at work, for instance, that can make a big difference for you in terms of your neat. But if like many of us, we are desk bound throughout the day, then you’re not going to be moving a lot.

The lack of daily movement adds up and you can be adding body fat. So it’s a good idea to move around a little bit more set a timer for yourself on your computer to get up.

Gaining Body Fat During The Pandemic

This is one of the biggest things I’ve noticed over the course of the pandemic and the lockdowns. We’ve been a lot more self-contained. Those things like just popping out to the store. Maybe that’s not happening as much, and I’m not picking up my son from school. So I’m not walking there and back.

If you’re not going to work and you’re just at home all the time, then you might not be walking as much, not moving around as much as you generally would.

Working at home could be a big trap sometimes!

Let me know in the comments, if there is a particular area of fat loss that you’re struggling with.

I’ll be happy to try to help you out. And while you’re here, check out some more of the weight loss videos I’ve got for you.

Now’s the Time to Set Fitness Goals for 2015

Create Your Ultimate Body WITHOUT Cardio