5 Myths About Abs…And What REALLY Works!

I get more questions about abs than anything else.

These are five common myths you might believe about abs. And the last one is the question that I get asked most often in the comments of my abs videos.

MYTH – You Need To Train Abs Every Day

The first myth is you need to train abs every day.

Everyone wants quick results. Most people assume that if you do things more often than you can speed those results along, but that’s not always the case with exercise your muscles. And that includes your abs muscles need time to rest, recover and grow in order to get stronger and to build. You can’t speed up the process by training every day or training several times a day.

Although of course your total training volume for your abs is going to matter overall.

I generally think two to three days a week is enough.

Although you could break it down in some days, do rectus abdominis work like crunches.

Other days you could do a oblique work and then you can also do some TVA work.

I’ve got a lot of videos about the transversus abdominis because that’s the inner abdominal muscle that often gets overlooked.

You can train the TVA every day, pretty much. If that’s the only thing you’re doing.

The type of exercises you do for the TVA are quite gentle and you can recover a lot quicker from those, but it’s definitely not necessary to do abs every day.

MYTH – Certain Foods Prevent You From Having Abs

The next myth is that certain foods are causing you to not have abs. So often you hear that, oh, if your carbs are too high, then you’re not going to have abs.

Well, that’s not true. You can have plenty of carbs and still have lean visible abs.

You don’t need to remove carbs from your diet in order to lose belly fat. Your body fat levels are determined by how many calories you have overall and whether or not that puts you in a calorie deficit. Certain macronutrients may have an impact. Fiber can be beneficial. More protein can be beneficial, but overall body fat loss is going to come down to whether you can produce a calorie deficit.

Now, if you have digestive issues, you may notice a difference in the appearance of your belly area, if you reduce certain foods that cause bloating for you. And there are certain ones that cause bloating for a lot of people, so things like beans or broccoli or brussel sprouts. That means that your stomach and then your intestines will be bulging out just a little bit.

And that affects the appearance of your abs, but it doesn’t affect the belly fat levels.

I did a video about flattening your stomach. And I talked about some of those foods, as well as some that you might not have thought of. You need to do tons of repetitions. Now, often when people want abs, then they just start crunching away on the floor, or they might give themselves a goal of doing like a hundred crunches a day. And this is quite pointless. And in fact may lead to injury particularly of the back because of the imbalances that you’re creating.

Abs are a muscle like any other. And they’re best trained for hypertrophy, which is muscle growth.

Generally we’ve said that hypertrophy occurs most in the six to 12 rep range, but recent research has shown that you can also have muscle growth outside of that range, but I still tend to set about 15 as the limit.

And if you can do more than that, then you need to figure out a way of increasing the intensity of that exercise. So that could be by adding weight. And that means that you’ll be able to do fewer repetitions again for each abs exercise. You really don’t need to do more than three sets of 15 repetitions.

MYTH – There Is One Best Abs Exercise

The next myth is that there is one best abs exercise.

Now there are different parts to the abs. As we’ve talked about the TVA, the inner most abs. There are certain exercises that target that area. 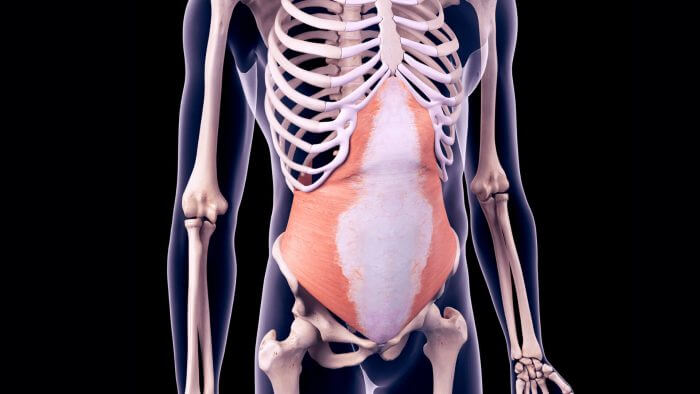 And then of course you have your internal and external obliques on the side. And different exercises will target those areas more effectively.

The stomach vacuum exercise, which I’ve demonstrated quite frequently, works primarily the TVA, the transversus abdominis. And it’s quite effective for targeting that area.

And then you have things like planks, which are not as effective for the rectus abdominis, but they do pull in your abdominals. So you’re using the TVA there and the rectus will do a little bit of work. It’s an isometric hold and you’re not getting any trunk flexion, which is the primary role of your six pack muscle.

Crunches or reverse crunches are a good way of targeting the rectus abdominis, but you don’t necessarily want to do just that exercise. If you do too much of that, you may develop imbalances.

You may develop lower back pain. If you’re predisposed to it, you may actually get a separation, a diastasis recti. You want to be very careful with rectus exercises. If you do have a DR.

And the last myth, the one that everybody asks me about all the time, abs exercises help you lose belly fat.

And people keep asking me in the comments, will this help me lose belly fat?

The best way to target your belly fat is to change your diet. We’ve known for quite some time now that you can’t spot reduce from particular area. So doing tons of crunches, isn’t going to get rid of the belly fat in the area. You may get kind of a tighter sensation in the abdominal area when you’re doing exercises and it kind of helps you pull things in.

So it might feel like things are tighter or even that your waist is a little bit smaller, but it’s really the muscles just pulling things in a little bit better, but you’re not losing any belly fat through doing these exercises. I mean, I suppose you’re burning off a few calories while you’re doing them so theoretically they could help, but it’s so small that it’s not relevant. You lose belly fat when you produce a calorie deficit and the best way for most people to do that is through modifying their diet.

I mean, it is possible to do an extreme amount of exercise and that will reduce your belly fat levels, but most people don’t have the time to do that.

The Truth About Getting Abs

People hate to hear this. And I understand why, because it’s a lot harder to modify your nutrition from day to day than it is to just lie down on the floor and do a bunch of crunches.

If that were the solution, then a lot of people would be walking around with six packs. And it’s not very common.

How You REALLY Get Abs

Eat The Right Amount Of Calories

So here’s how to actually get at the first one. I just talked about, you need to have the right amount of calories in order to produce that deficit. So you’re going to be burning fat off.

The next is do exercise and that’s overall body exercise. I actually prefer weight training because your muscles get stimulated when you’re doing lifting actions like squats and deadlifts and shoulder presses. Anything that requires a bit of stability. Your abdominal muscles are working during that time.

Now, cardio can also play a bit of a role. It will help you burn off some calories, but keep in mind, you need to do a considerable amount in order to lower your body fat levels that way. So I consider cardio optional and weight training more important because you’re building overall muscle mass.

It’s quite rare to see someone who’s very skinny and has very developed abdominals because it usually comes through a process of overall training and then dietary modification, a little bit of cardio.

My abs have always looked their best when I’ve been doing more weight training and I’ve had more overall muscle. I take in the right amount of protein to make sure that I’m building muscle at that time. And then my abs muscles tend to grow at the same time. My other muscles are growing as well as a side note here.

Genetics And Your Abs

I want to talk a little bit about genetics because I think it’s really important to understand that not everybody’s abs are going to look the same, no matter what you do. So we all have a Donald muscles underneath, but depending on your body size and shape and structure, they’re going to look different.

Someone like myself who has a long torso. I mean, my abs are never going to be like short and developed and really bulgy, like a lot of people get and that’s okay.

The goal here is just to reveal the best abs that you can have.

Do The Right Abs Exercises

And the last way to actually get abs I consider the least important, but it’s do the right abs exercises.

If you’re interested in a video about abs exercises to target the rectus abdominis, please leave a comment and I’ll do that for you.

I really think that the abs exercises are the least important part. You have to get everything else in place.

How Abs Are Developed

Great abs are really the overall result of a lifestyle that includes strength, training, a bit of cardio physical activity and eating right.

And that’s why they’re so hard to get.

Don’t Let Age be a Barrier to Achieving Your Goals

Welcome To My Channel! Ivana Chapman

My Nutrition and Fitness Routine on Holiday