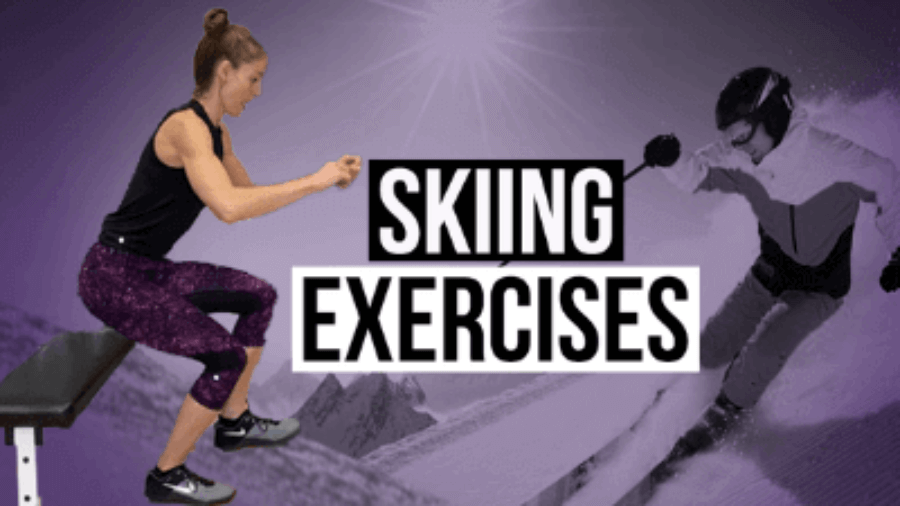 Do you want to strengthen your legs for skiing?

Watch this video and I’ll show you five exercises you can do to make the most out of your time on the slopes.

This is Ivana helping you get fit, healthy and strong.

If you want to get better at skiing, then strengthening your legs can really help.

I’ve worked with skiers, both competitive and recreational to strengthen their legs for skiing.

I’ve also been skiing myself pretty much since I’ve always a kid, but I’ve only really worked on improving my skills in the last few years.

You’ll see clips of me skiing in this video.

You need a lot of core strength as well.

Although we are going to focus on the legs in this video.

Stick around until the end because I’ll show you how to put the whole routine together. The sets and reps that you need for this workout.

Then you also want to do exercises where one leg is working at a time because even though the legs are often together, they’re going to be doing the work separately. So sometimes one leg will push off and the other one will have to restrict the movement.

You’re working with pushing from edge to edge.

So generally you’re doing unilateral work, working one leg at a time. So most of the exercises I’m going to give you now are unilateral.

The first exercise is the VMO step up.

The VMO is short for the vastus medialis oblique and it’s one of the quad muscles. It’s actually the inner quad muscle, the one that’s closest to the midline of your body, and it tends to be weakened a lot of people.

In order to balance out the quad muscles, we want to work the VMO a little bit harder and that makes it less likely for you to experience stress on the outside of the knees during skiing or any other activity where you’re putting your legs under a lot of stress.

Now this exercise is a lot tougher than it looks. You want to elevate the top leg. You can either use a small riser like I’m doing here. Or you can put a little weight plate underneath. You’re going to make sure that the bottom leg is pushed out in front.

So the heel of that bottom leg is going to be approximately at the level of the toe of the leg that’s on top of the step. And you want to do this in a slow and controlled motion, hold at the top and make sure that you’re extending so you can feel the quad and particularly the VMO on the inside of your quad contracting. And it does start to burn after a while.

The next exercise is the cyclist squat.

Squats in general can be very useful. This one is particularly really, really great for skiing. You’re also focusing on the VMO, the inner quad muscle in this particular exercise. And you do that by elevating your heels and that also allows you to get a great range of motion on that. You can see that I’m trying to go all the way down and then pushing back up.

And this one will also burn quite a lot, especially if you do slightly higher reps.

Now we have the single leg squat to bench. Now this really challenges your stability. A lot of people find this very hard at the beginning. Some people can’t do it at all.

You can adjust the height of the step or the bench that you’re actually coming down to. So obviously the lower you go, the harder it is. So you can start yourself off at a relatively high level. You can even put a a pillow or something on top of the bench so you don’t have to come down quite as low, but you’re, you are aiming towards the bench, you’re coming down with as much control as possible. There are a couple of hand positions here so you can either just keep your hands out, it can be a little bit wildly.

That way you can keep your arms together so you kind of keep them under control.

The hardest position is crossing your arms in front. So if you have your arms crossed, it makes it a little bit more tricky to be able to do that single leg squat. However you might need that challenge. If you’re very strong in your legs.

How This Exercise Applies To Skiing

Now think about how important this sort of exercise is for skiing. You’re often on that one leg really going deep if you want to push off hard. So it is a really key exercise and if you’re able to do it, you’re going to find it a lot easier to recover. If for some reason a leg comes out or you get your leg, you get the ski trapped somewhere and you need to pull out with jugs just standing on one leg.

The next exercise is the stability ball hamstring roll. The hamstrings tend to be weaker than the quad, so we want to strengthen the hamstrings in order to prevent a muscular imbalance. The hamstrings are also responsible for preventing an injury to the ACL, so that’s the anterior cruciate ligament, which is the most common injury in skiing.

If you’re strengthening your hamstrings, you’re actually helping to prevent that particular injury. Specific to skiing, but in general it’s very, very important as well.

If this becomes too easy for you because eventually it will, then you can try it with a single leg.

So you’ve turned this into a unilateral exercise and this one can be very, very challenging. It’s the same kind of movement.

You want to make sure that your hips are square, you take the time to lift first with the hips off the ground, and then you roll in and roll back out again. So you’re rolling in and out and the calves and the hamstring are getting a workout there.

Our final exercise is the Bulgarian split squat. Now this is one of those killer exercises for the legs that a lot of people, including myself, sometimes dread, but it is a very important exercise. It will work the quads, but it will also work the glutes. You really need to have strong glutes in order to maintain stability.

That’s what a lot of people are missing. So we’re going to do the Bulgarian split squat in order to work on glute strength and stability on one leg, which we know is very important for skiing.

Set Up For The Bulgarian Split Squat

You’re going to set yourself up not too far away from the bench. You want to be able to drop down low enough so the knee comes pretty much towards the ground.

Don’t go down too quickly. I want you to come down very slowly and then back up. And if you do a slight forward lean, then you’ll find that you’ll be able to feel the glutes a little bit more. If you stay too upright, you’re gonna feel the quads a little bit more. So a slight forward lean in order to emphasize the glutes on the Bulgarian split squat is what we’re looking for. And you want to do this of course on both legs as well.

As promised, here is the whole program: 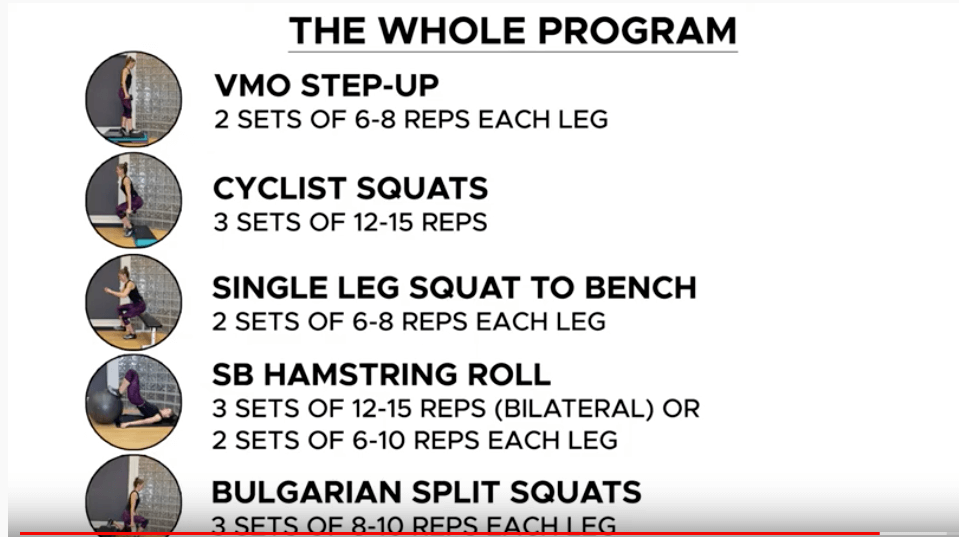 I’ve put it all together with all five exercises and the recommended sets and reps for each exercise.

Try to take about 30 seconds to a minute and a half between each set.

And then you also want to take probably about two minutes between each exercise.

Once you go through these exercises, you’ll see how they directly relate to the type of strength and the positioning that you need for skiing. They’re going to build all the elements that you need to become a better skier. You will have your legs in the kind of condition that will handle the stresses of skiing.

How To Use This Program To Prepare For Skiing

Ideally, you’re going to be doing this six to eight weeks before ski season starts. So we’re a little late right now and that’s totally fine. Even if you do these exercises in between whatever skiing you’re doing at the moment. Try maybe one to two times per week. Incorporate these to try to build your leg strength as you go.

Let me know in the comments which of these exercises you found the most challenging.