Increase Protein Intake In Your Diet

In this video, I’m gonna show you how to increase protein intake in your diet.

You’ll find lots of suggestions, as well as some of my personal favourites.

I’m gonna share top protein sources. And at the end, I’m gonna mention some foods that people think are great sources of protein, but actually aren’t.

I recommend that my clients get zero points oven to one gram of protein per pound of body weight per day.

For some people, this is a bit of a struggle at first, if they weren’t fans of protein before.

Here are my top suggestions for adding protein to your diet.

There’s a reason that body builders talk about this all the time. It is a staple because it has such a high amount of protein for a smaller serving. A boneless skinless chicken breast has about 23 grams of protein, which is very good. And that’s only 110 calories.

So as I go through these foods, I’m also gonna mention how many calories are in that serving size. So if you’re adding a lot of calories, but you’re not getting as much protein, then it’s not as valuable a protein source.

If you’re trying to get into a calorie deficit and lose body fat or lose weight, you want to also reduce your calorie intake a little bit.

So you wanna get the protein as high as possible, and then keep the calories relatively low.

This one here, three quarters of a cup, 90 calories. So quite low, 15 grams of protein.

I also have Icelandic Skyr, which is a type of yogurt for three quarter a cup. It’s 110 calories and 19 grams of protein. So that’s quite a lot.

These are low fat varieties. So that means the fat is lower and the overall calories are lower and you’re getting quite a lot of protein.

Eggs can be a good source of protein. A single egg only has about six grams of protein and that’s in about 70 calorie. It’s not bad. And a lot of the nutritional value is in the yolk, but if you wanna increase your protein intake, then you might wanna add egg whites as well.

If you’re doing scrambled eggs or an omelet or something like that, then you can have one or two whole eggs. And then you can also add egg whites. A quarter cup of egg whites, which is about two egg whites, seven grams of protein.

And that only has 35 calories. So it’s a good way to top up your protein when you’re having eggs.

That’s often what I do. I’ll have two eggs and then I’ll mix it in with a bunch of egg whites. Then I’m gonna increase the protein value of that meal. Get a little bit of nutrition from the yolks, and then also get a lot of protein with very few calories. Sometimes I do a bit of a stir fry where I mix in chicken and vegetables into the egg whites as well. And that can be really tasty.

Cottage Cheese can be a good source of protein.

This one here for half a cup, a hundred calories and 14 grams of protein.

There’s also something called pressed cottage cheese. It doesn’t have as much flavor, but it is quite high in protein as well.

So you can easily add that to other things.

Dairy products are a good source of protein, particularly the lower fat varieties.

There’s one other source of protein. I really like it’s bocconcini and it’s a lower fat version. So one piece of bocconcini has eight grams of protein.

And they’re about that big. If you have three of those, you’ve got 24 grams of protein. So not bad really.

Milk is also a fairly good source of protein. It’s very easy to take in. So I’ve got a regular milk here. This one’s 2%. One cup has 130 calories in. It has nine grams of protein. There are lactose free versions as well.

For those of you who don’t digest lactose, there’s actually some milk that has slightly more protein than others. For one cup, it has 130 calories, but this one has 14 grams of protein. If you mix a milk in with your protein shake, then you’re adding even more protein.

Lower fat versions of dairy tend to have fewer calories. They also have more protein.

That doesn’t mean that you should always have lower fat sources of dairy. It’s good to mix it up a little bit. It’s totally fine to have some fat in there. It can actually increase your feeling of satiety with a meal. So sometimes if you have too much in the way of low fat dairy products, then it won’t fill you up as much.

Lean ground meats can be a good source of protein. So that’s either Turkey, chicken, pork, or beef.

Turkey, and chicken tend to be a little bit lower in fat. So they’re gonna give you a little bit more protein for the amount of calories that you’re taking in.

So extra lean ground Turkey breast that has about 128 calories, 27 grams of protein in about three ounces.

Fish can be a good source of protein, particularly the white fish like Cod or Haddock.

Things like salmon are also good sources of protein, but do keep in mind that they’re gonna be higher in calories and higher in fat. That’s not to say you should avoid them. Obviously omega three fats are higher in those source is can tuna 26 grams of protein for 120 calories. So that’s very good.

Now the one thing that you wanna note when it comes to fish is mercury levels.

So you don’t wanna overdo it with cans of tuna. An adult who’s not pregnant could safely have probably about two to three cans of tuna per week of chunk light tuna.

So it’s lower in mercury about a third less mercury than albacore tuna.

This chart here is gonna show you how much fish you can safely have in terms of mercury based on your body weight: 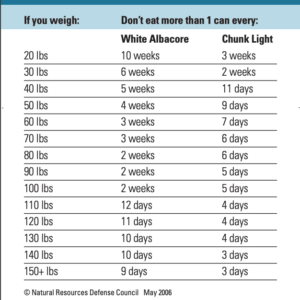 Protein powder is also a good source protein. Some people consider it a supplement. I don’t, it basically comes from milk way.

Whey Isolate is a little bit higher in protein. It doesn’t have any fat.

Whereas concentrate has a little bit of fat way. Isolate tends to be a little easier on the digestion.

The biggest plus for way concentrate is that it’s cheaper. So if you’re trying to budget way, isolate is gonna cost you a little bit more, but they’re actually quite affordable when you compare them to meat. For instance, for the amount of protein that you’re getting.

Vegetarian And Vegan Sources Of Protein

And now we’ll move on to the vegetarian sources of protein, which I actually think are more just supplemental proteins for people who are consuming animal products.

Because you’ll see they’re not as high in protein for their serving size as the animal products are.

Lentils, not a bad source of protein. Half a cup of lentils has about nine grams of protein in 110 calories.

So this edamame package is showing half a cup, 90 calories, and that has nine grams of protein. We just keep this in the freezer and boil them up. When we wanna eat them.

Tofu can be a decent source of protein. Three ounces of tofu is only about 70 calories, and you’re gonna have about seven grams of protein in that.

Beans can be a reasonable source of protein. Different beans are fairly similar in their quantity of proteins.

My example here is black beans, seven grams of protein in, in half a cup.

And that’s about 110 calories. And you’ll find most beans are around that range.

Foods That ARE NOT Great Sources Of Protein

And now we’re gonna move on to foods that are not as good protein sources as most people think.

The first one is quinoa. Some people think of quinoa as a grain, but it’s actually a seed. This may actually explain it’s nutritional profile a little bit.

Half a cup of quinoa has 12 grams of protein, which is not bad, but that’s gonna bring in about 313 calories. And it also has five grams of fat.

So when you compare that to the other protein sources, we’ve already talked about it, doesn’t really measure up.

A lot of people think that that’s a really great high protein thing to have in the morning, but half a cup of oatmeal only has about five grams of protein in about 150 calories. Now, if you do want oatmeal as your primary protein source in the morning, for instance, then you could also mix it in with some higher protein milk, maybe even some protein powder and then a little bit of nuts as well.

So it all will add up.

We don’t always have to think of our protein sources individually.

Ideally trying to get about 20 grams of protein per meal or snack. It’s not that you need to have a certain amount at one time, but if you only have very, very small amounts of protein, you’re gonna have a hard time adding it up over the course of the day. So if you do about 30 grams of protein and you have that four or five times a day for someone who’s on the lighter side, that’s going to work, it’s gonna be enough to meet your protein goal for the day.

Nuts are also not a great source of protein. A half a cup of almonds, which is quite a decent serving size, has about 15 grams of protein.

That’s true, but that serve is about 414 calories and 36 grams of fat, which is quite a lot.

So if you’re trying to achieve a calorie deficit in order to lose weight, you’re gonna have a harder time.

Almonds are probably the highest in protein of the nuts. So I’m using them as an example. Other nuts, like macadamia nuts or walnuts or cashew are a little a bit higher in fat and lower in protein, even further.

Consider it a source of fat.

Remember that I’m not saying to not eat those foods, you can certainly incorporate them into your diet. Butt just don’t consider them your primary sources of protein.

Eating Protein According To Your Goals

I’ve spoken about most of these protein sources as a good choice for weight loss or for fat loss. But if you’re looking primarily for muscle building (hypertrophy), then you may want to actually increase your calories.

So you can take in the protein, but you also wanna take and excess calories in order to build muscle.

If you’re ever looking for protein information for a product, if it’s not on the label that you’ve got, just use an app like myfitnesspal. It gives you the nutrition information for different foods.

At What Age Does Muscle Mass Decline?