How To Lose Weight Without Counting Calories Or Macros

Are you trying to lose weight, but don’t want to count calories or macros?

In this video, I’m going to give you tips to lose weight without counting calories.

Hi, it’s Ivana, helping you get fit healthy and strong at any age.

Let me start by saying that counting calories can be an effective way of losing weight.

I actually created a video about whether you should count calories.

I do recommend calorie counting in some cases. However, there are other times when calorie counting, isn’t a good idea. It’s just too difficult or the client doesn’t want to do it. Remember though, whether you count them or not, calories do matter. Macros do matter. So the tips that I’m going to give you are going to help you naturally decrease your calories and adjust your macros so that you’re able to lose weight. You just don’t have to be there with an app entering all your food as you go about your day.

My first tip is to eat more vegetables and fruit. Not only are the health benefits of vegetables, pretty much universally agreed upon, but vegetables are a source of fiber and they fill you up with very few calories per serving. 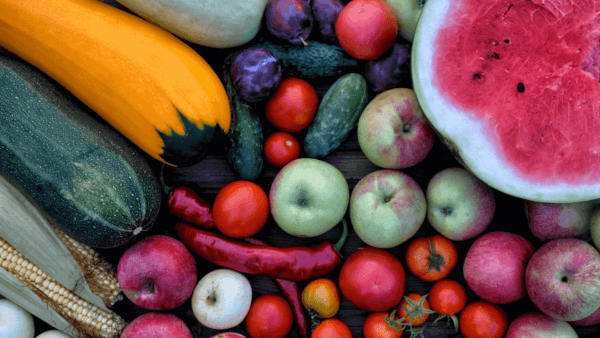 The same goes for fruit.

So despite the fear-mongering around the sugar and fruit, I’ve never actually heard of anyone becoming overweight simply by eating too much fruit.

You’re more likely to get diarrhea. Then you are to put on weight or put on fat from eating too much fruit.

Water, of course, is the main part of what you should be drinking. You also want to stay hydrated because thirst can often be mistaken for hunger. So by drinking water and making sure that you’re hydrated, you’re less likely to overeat. And that means you naturally reduce your calories.

Other zero calorie beverages like coffee or tea are great too. They don’t actually cause dehydration as a lot of people think they actually do provide fluid. So you can still have your caffeine from that coffee or tea. Then you’ll get that kick, but not necessarily the extra calories that are coming from milk, cream, sugar.

Not that that’s bad, but if you want to just naturally reduce your intake. If you were having a couple of coffees each day that were 250 calories or so then you can easily lose weight just by switching to black coffee.

I’ve already done a video about Intermittent Fasting, which is essentially what skipping breakfast is.

So if you’re currently having a breakfast that say 250 up to about 500 calories, you can lose half a pound to a pound just by eliminating that breakfast. And this is often why intermittent fasting works for some people.

So you have to decide which of those people you are and determine if skipping breakfast is right for you.

Protein keeps you fuller for longer. It helps to reduce cravings. And it’s also involved with muscle repair and muscle growth, which is an important part of weight loss.

Long-term, protein helps you feel satiated. So that means that you’re feeling full after a meal. And that means you’ll be less likely to eat more later on. And that reduces your calories for the day.

Try to pick primarily lean sources of protein and eat them with every meal. So that could be chicken or turkey breasts, lean red meat. It could be dairy like cottage, cheese, Greek yogurt, whey protein, eggs as well.

I think it’s beneficial to have whole eggs. They do have more fat compared to egg whites, but they have a lot of nutrients in them.

But if you want to up the protein content of your meals, you can have one egg and then several egg whites on top. That also doesn’t mean that you can’t have higher fat protein sources as I’m going to talk about next. It’s important to also have one other thing in order to feel satisfied with your meal and eat less overall. So if you’re just trying to lose weight without counting calories, it is easier when your protein sources are lower in fat.

However, you don’t want to go too crazy with that.

Eat Some Fat With Every Meal

And that brings me onto my next point, eat some fat with every meal. So this can be a tablespoon of olive oil with a chicken salad or just using a higher fat meat source for your meal. Make sure that you have a little bit of fat in each meal so that you feel fuller for longer fat also contributes to satiety.

So you’re less likely to overeat later on or to experience food cravings, which adds to your total calorie intake for the day. So while the low fat diets or the eighties do help you reduce your calorie intake, they also make it quite challenging to keep your appetite under control.

As a side note here, research shows that low fat and low carb diets are approximately equal for maintaining long-term weight loss when calories and protein are controlled for. So that goes back to my original point about increasing the protein intake because higher protein intakes make it easier to reduce your appetite and reduce the total amount of calories that you’ve taken in practice.

I found that most people do find it easier to manage their cravings and their appetite on a lower carb diet. That doesn’t mean no carbs, but slightly lower carbs.

Even having a small snack, like 200, 250 calories can add up. If you’re having a couple of those each day, then simply by cutting out the snacking, you could lose weight.

There used to be this belief that has been pretty much debunked by science about having meals more frequently. So if you’re eating more frequently, you would stoke your metabolism and then you’d burn more calories. But what we’ve actually found is that if the calories are equivalent, then it doesn’t matter if you have them in two meals, or if you have them in six meals.

A lot of my clients have found that just having three solid meals and not allowing themselves to snack has produced weight loss. If the lack of snacking makes you overeat later on, then you’re going to have a problem.

But in general, if you commit to not snacking and eat exactly the same thing, you’re going to lose weight.

Protein, fat, and fibre, generally in that order, increase satiety of a meal. So it’s really important for you to get the protein, the fat.

And now we’re going to talk a little bit about the fibre.

So obviously there’s a lot of fiber in vegetables and fruit, which we know are beneficial anyway, because they are filling you up for a very small amount of calories. But also if we’re talking about weight loss (and you’re looking at calories in versus calories out), some of the fiber isn’t absorbed by your body.

So you’re effecting that calories in part of the equation. It’s almost like you’re taking in slightly fewer calories, if those calories contain fiber. So bumping up your fiber intake can make you naturally lose weight.

So this the other part of the equation.

Calories in is the food that you’re consuming calories out is how much activity you do.

Particularly if you’re on a cardio machine at the gym, those estimates are pretty inaccurate, but if you’re not exercising at all and you decide to start working out, say three times a week, then you’re going to increase your calorie expenditure.

One Thousand Steps A Day

And even if you think something that seems really trivial, like walking 10,000 steps a day that really can affect your calorie expenditure. If you go from completely sedentary to 10,000 steps a day, then you could be losing a half a pound to a pound a week just by increasing your walking.

So it may burn off, let’s say 250 to 500 calories. It depends on how much you weigh and how fast you’re walking as well.

I recommend that you do address both calories in your nutrition and your calories out your physical activity levels.

It has been shown that people who exercise are more likely to maintain weight loss over time with my experience and the experience of my clients.

I’ve noticed that when people are exercising, they’re more motivated to eat properly as well. So often in our heads, it just becomes associated. If we’re exercising, then we’re like, “Yeah, I don’t want to waste all that effort that I’ve made by downing 500 calories in this pint of Ben & Jerry’s “. That kind of thing.

So hopefully the exercise and the extra movement will make you feel a lot better about the other choices you’re making on the nutrition side.

While the calorie burn from exercise might not be that much on its own, but it does support the efforts for calorie reduction.

I hope you’ve learned something today.

James Corden Weight Loss…And What YOU Can Learn From It

Benefits of Changing Your Attitude