How Much Cardio Do You Need To Lose Belly Fat?

Are you trying to lose belly fat and you’re wondering how much cardio you should do?

I’m going to give you a science-based answers to design your workout program to lose belly fat.

Hi, it’s Ivana helping you get fit healthy and strong at any age.

The short answer to the question, how much cardio do you need to lose belly fat is: NONE

Do You Need Cardio To Lose Belly Fat?

You do not need to do any cardio to lose belly fat or to lose weight for that matter. Now that doesn’t mean that you shouldn’t or that cardio can’t help you lose body fat. It can, but you can also lose belly fat. In other ways, if you choose to.

In order to lose weight, you need to produce a calorie deficit.

And that means that you’re burning off more calories than you’re taking in. And there are a lot of different ways of doing that. Cardio is just one of them.

So to lose belly fat, you just need to decrease your calories in. So that’s either the food that you’re eating or the beverages that you’re drinking.

You can also increase your calories out. So that could be through exercise, a structured workout, but it could also be through overall body movement over the course of the day. So when people talk about counting their 10,000 steps a day, that’s what it’s talking about. The additional movement burns more calories and produces weight loss.

It’s also why men tend to get the bigger beer bellies.

However, women generally have more fat overall. So we’re all storing a bit of extra fat in the belly area.

Unfortunately, you can’t decide where you get to store your fat. And by now most people realize that spot reduction where you’re exercising a particular area in order to try to burn fat off that area doesn’t work. So all those crunches that people used to do, thinking that it was going to burn away the fat in their stomach area, doesn’t work. We’ve known that for a while.

So doing tons of crunches or ab work, isn’t going to burn the fat preferentially from that area. When you lose weight, you’re going to lose body fat all over your body. And for many people, the belly is the last place where it’s going to go.

There does seem to be some evidence that cortisol, which is commonly known as the stress hormone can be associated with excess fat storage in the belly area.

But we’re not a hundred percent sure how that works. Some people are susceptible to this and others are not. They can be very stressed, but still not really storing excess belly fat still.

If you’re not able to handle your stress, then you’re probably more prone to overeating and stress eating. That means you’re going to be consuming more calories and probably high calorie foods, comfort foods that are going to add up very quickly. So you will be more likely to add belly fat and put on weight that way.

Now there’s a lot of buzz around high intensity interval training compared to steady state cardio. When we consider EPOC –  excess post-exercise oxygen consumption – what your body’s doing after a workout and high-intensity workouts are slightly higher and EPOC.

However, EPOC is only about five to 15% of the total amount that you’ve burned off for a workout.

Many people think they’re burning off tons of calories when they’re doing exercise. But reality is often disappointing.

If you take a look at the activities here in this list, and you can look based on your weight, you’ll see that it’s probably not as exciting as you might think. 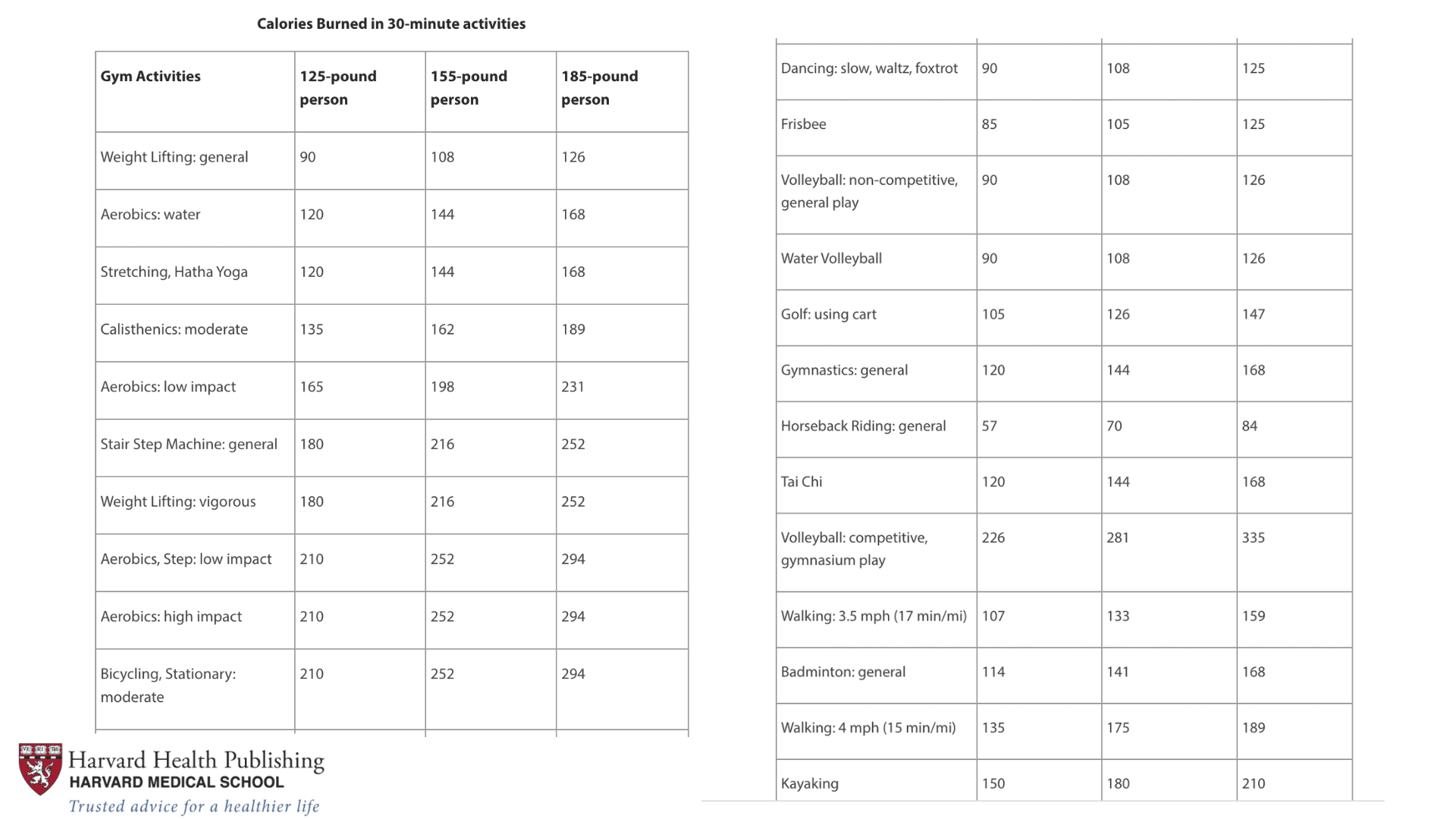 So it’s very easy for those calories to come right back on again, especially if you’re not careful or you get very hungry after workouts and you end up consuming more than you would like even worse.

If you use those sorts of foods to try to reward yourself for your workout, it’s not going to work for you.

The Food You Eat Affects Belly Fat More Than Exercise

So what you have in your kitchen or what you eat when you’re going out, makes a bigger difference than your workout.

Now don’t get me wrong. Of course, I think workouts are really important. They keep you motivated. They make you feel energetic. So you’re not sitting on the couch. There’s a lot of reasons to work out other than just the amount of calories that you’ve burned.

And while it is true that having more muscle mass in general will increase your resting metabolic rate.

It’s not as high as most people would like to think. The muscle that you acquire through weight training probably increases your resting metabolic rate by about four to 7%. So there is a study where that’s exactly what they found after a few months of training, the subjects increased their RMR by 4-7%.

And your resting metabolic rate is not what you burn all day. It’s actually what you burn completely at rest. So you’re going to burn more overall if you’re moving and you’re not lying in bed all day. However, that increase in resting metabolic rate from weight training, the increase in muscle mass that you’re going to get is probably going to amount to less than a hundred calories per day for most people. Which is not unimportant, but it’s not as impactful as many people think.

Adding Up The Benefits Of Weight Training

But when we put it all together, it really does add up.

And it’s the same with cardio.

Cardio burns slightly more calories when you’re actually doing it than weight training. But of course, weight training has other benefits. The EPOC is slightly greater. The increased muscle mass is going to give you that little bit of increase in RMR.

Ideally you have a combination of weight training and cardio in your routine.

Here are my four tips for losing belly fat.

You’re more likely to make better decisions when it comes to food. And that as we’ve already seen is pretty much a key for belly fat loss.

There’s really no way around this. Even if you’re following a particular diet plan, you’re losing weight because you’re reducing your calories in some way, whether that means cutting back on processed foods or (and this is not something I recommend) avoiding things like carbs.

Which you don’t need to avoid by the way, I’ve got another video about that. So please check out as well.

I go into this in more detail in other videos, but protein is the most thermogenic nutrient. So if you increase your proportion of protein, then you’re likely to see more fat loss than if you rely primarily on carbs and fats.

And the least important one, but still important is:

You don’t actually need to do any cardio.

You can lose weight and reduce your belly fat levels, simply through tightening up that diet a little bit, reducing the calorie intake that you’re having on a daily basis, or doing other forms of activity, like weight training that bring you other benefits.

‘So it’s always just a rough guideline, but you know, if you add an extra workout a week, whether it’s a weight training workout or a cardio workout without doing anything else, that’s different than you’re going to be burning off more calories.

If you add a burger every day without doing anything else, you know that you’re going to be increasing your calorie intake by that amount. And you’re going to progressively put on weight and put on belly fat.

Please leave a comment if you have any questions about belly fat loss.

Small Home Gym Setup Ideas For A Condo Or Apartment

How to Get Back Up When Life Knocks You Down

Benefits of Changing Your Attitude

Build A Strong Back And Improve Your Posture With Weight Training