How Long Does It Take To Get Abs?

Abs in seven days. What about abs in 10 days?

Hopefully you’re smart enough not to fall for anything like that, but what about abs in 30 days?

Is it possible? Well, it depends.

In this video. I’m gonna explain how you can figure out how long it’s gonna take you to get visible abs.

We ALL Have Abs!

Believe it or not. We all have abs. And by that, I mean, we all have a rectus abdominis that has separations in it.

The difference is how much fat you’ve got on top of that muscle.

The Time To Abs Is Different For Everyone

We’ll go into more detail about your personal timescale for getting abs.

And at the end, I’m gonna share my valuable tip for getting visible abs.

If you want your abs to show, it’s gonna be primarily about your nutrition. Probably about 80% of the work.

In fact, it’s possible for someone who doesn’t even work out to have visible abs, as long as they’re lean enough. But you’re more likely to see abs in someone who has more muscle development overall, particularly someone who does full body weight training, or very challenging calisthenics.

A low body fat percentage is the key to visible abs.

In men, you’re gonna start to see visible abs around the 15% body fat mark. So that’s when you’ll probably start to see the outline of your abs and maybe that four pack at the top. As you start to go down to about 10%, that’s when it’s going to be a little bit more defined and you, or six pack is gonna be much more noticeable.

In women, you can actually see it at a higher body fat percentage. Sometimes around 20%, you start to see those outlines, especially around the obliques. And then you’ll start to see the top of the rectus abdominis. And somewhere around 14 to 18%, they’ll be a lot more obvious.

Those are only rough estimates, of course. Everybody’s abs will look a little bit different. Part of that is due to the difference in genetic muscle thickness.

So here to the chart for the men: 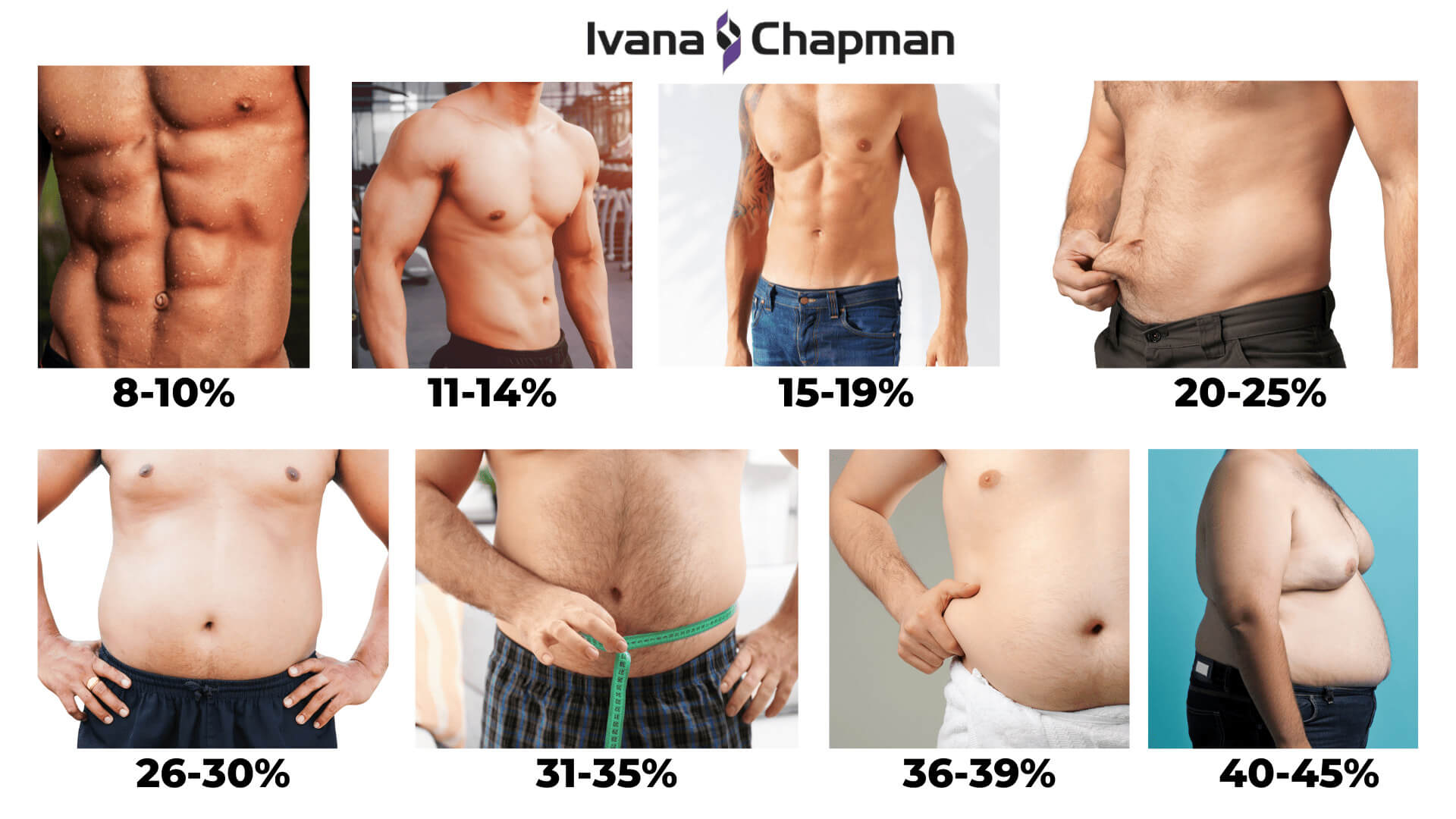 Take a look at these photos and see what, which one applies best to you. 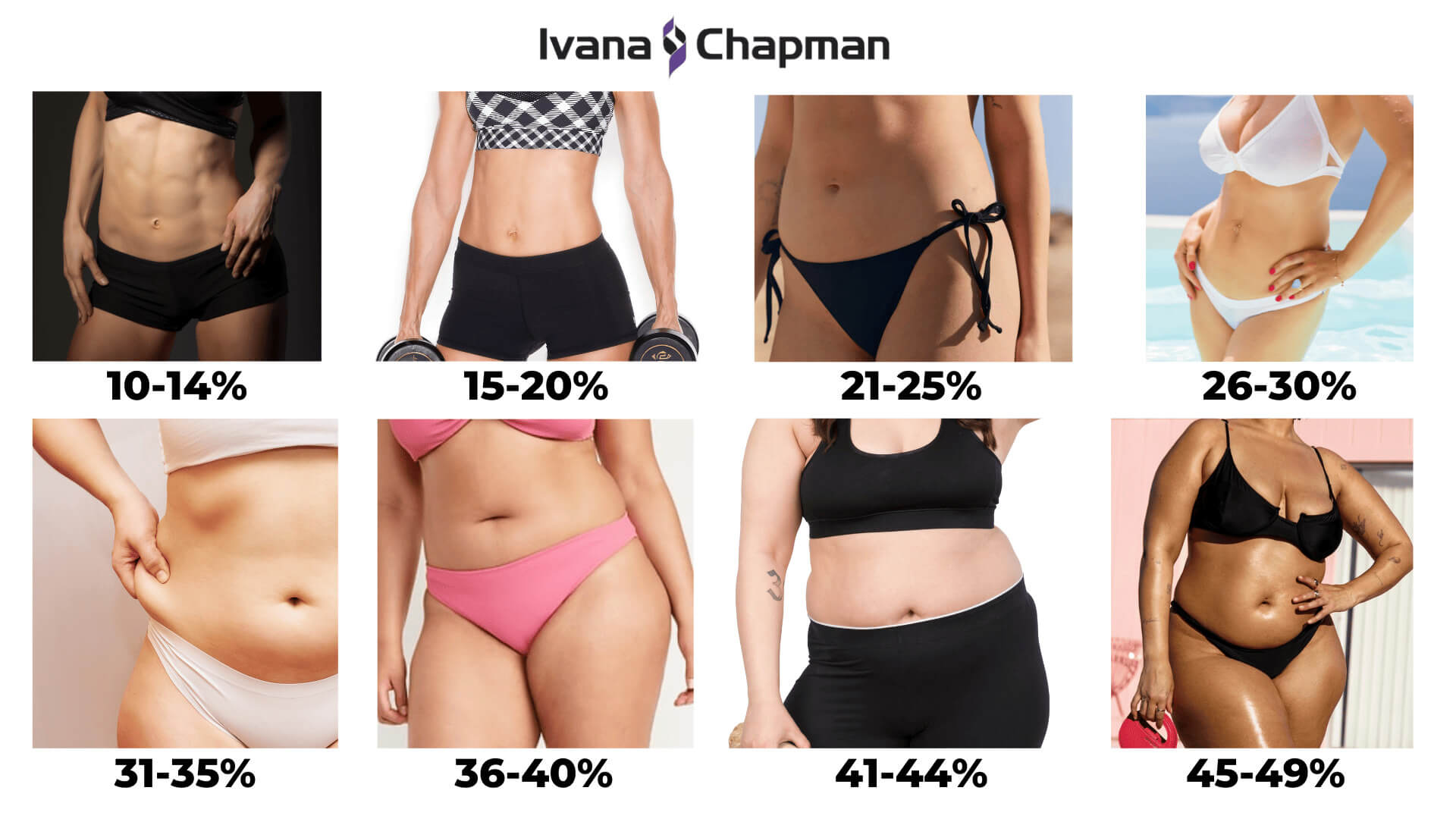 Obviously they’re showing a range of body fat percentages because it’s very difficult to get an exact number for that.

You need to estimate your body fat percentage, unless of course, you’ve had it measured somewhere.

Keep in mind that a lot of the measures that are often used the scales and often even CS can be off. There’s even been criticism made about DEXA. That it’s not that accurate. So let’s just go by those photos and try to get a rough estimate.

Let’s say that you weigh 180 pounds and that you’re about 20% body fat. So in order to find out how much body fat you have, you’re just gonna multiply your weight by 0.2.

And then you’re gonna subtract that from your body weight in order to find your lean body mass.

In this case, the lean body mass is 144 pounds.

What You Need To Consider

So there’s a couple of things we need to consider first, where are you at right now in terms of your body fat percentage and where do you wanna be in terms of visible abs because there’s obviously a range of visible abs.

There’s just a little bit visible off the top, or you can see that four pack starting to show. Or there’s completely cut and seeing all those segments perfectly, and that’s gonna require a much lower body fat percentage.

You’re gonna estimate the time it’s gonna take for your abs to start to show, and then you can just continue on with that process to calculate when they’re really, really gonna show.

So you’re gonna use your target body fat to find out what your weight will be when you get to that body fat percentage.

I’m going to use the male example that I just did.

So that’s where his abs are going to start to show. So you’re gonna multiply that lean body mass, 144 pounds by the body fat percentage that we’re aiming for which in this case is, is gonna be 15%. And that comes out to 165.6 pounds. So that’s the weight that he’s gonna be at at 15% weighs 180 pounds now.

Safe and healthy weight loss is about half to one pound per week. Although it will vary according to your body weight.

If you’re larger, you can safely lose a larger percentage. But we’re just gonna go with this simple example.

So it’s gonna take him roughly seven to 14 weeks in order to get down to 15% body fat and start to see visible abs.

Remember that this calculation assumes that you’re continuing with your weight loss on a gradual consistent basis.

So you’re following your nutrition plan so that you maintain a calorie deficit for the duration. If you start eating in a calorie surplus for a longer period of time, or you start binging frequently, and you’re in the position where you’re no longer losing fat, then that’s gonna delay your process. So that seven to 14 week period is really the minimum that it going to take.

Other Things To Consider When Aiming For Visible Abs

Now, there are a few other considerations that you need to take into account.

If you’re at a higher body fat percentage, then it’s going to be a little easier for you to lose weight initially.

And you can safely lose about 1% of your body weight per week while maintaining your muscle mass. So that means that someone who’s in the 35 or 40% body fat category will lose more weight initially per week. And then as they get closer and closer to their ideal body weight, closer to their visible abs range (let’s say about 15%), then it’s gonna take longer.

Preparing For Frustration Along The Way

This is why a lot of people experience frustration, especially if they’re coming from that higher body fat percentage. And they’re seeing a lot of changes initially. And then as they get to a lower body, fat percentage, things become harder. They’re not losing as much weight each week. This is something you need to prepare yourself for. You won’t be able to lose as much because you don’t have as much to lose anymore.

So how much difference do abs exercises make?

Not a lot. Really.

If you get yourself down to a low enough body fat percentage, you’ll probably see your abs. Even if you don’t do any abs exercises.

That’s not to say that abs exercises are completely useless. They can help to build the rectus abdominis a little bit.

I have a video of targeted abs exercises. So you might wanna check that out.

But remember that most of the result is gonna come from getting to that low body fat percentage.

The Role Of Weight Training

Weight training can certainly be helpful. I think overall body training, particularly if you’re doing full body. You’re gonna stimulate the abs muscles in different directions. And if you’re eating also to promote muscle growth, then you may see some growth in the abs. You’re gonna have that more muscle appearance, and you’re more likely to see visible abs as you get leaner.

Not to mention the fact that weight training can help you get leaner.

Cardio can also assist with fat loss, but make sure you don’t go overboard with it.

Exercise and particularly steady state cardio can make you hungry.

So if you’re one of these people who eats a lot more when they exercise, be very careful. Because you’re gonna lose out on that calorie deficit with your nutrition. And then you’re gonna have a much harder time getting your body fat percentage down.

How long it takes to get visible abs is gonna vary from person to person. And your idea of what visible abs means may be very different from somebody else’s.

My Most Valuable Tip For Visible Abs

My most important tip for getting visible abs is to trust the process and enjoy it.

It needs to become a part of your lifestyle if you’re just making some temporary changes and wanna see visible abs. Okay, that’s fine.

But if you wanna have visible abs longterm, then it needs to be part of a change in your regular eating plan and in your exercise routine.

Normally people get visible abs as a result of an overall lifestyle change, rather than doing a few abs exercises and starving themselves, which seems to be the approach that a lot of people take. So follow a sensible plan and stay consistent to get visible abs.

How Long Does It Take To Build Muscle?

The Best Study is the Kind You Perform on Yourself

5 Ways to Avoid Getting Sick This Season

A Quick Message About The Holiday Season