How Does Alcohol Affect Weight Loss?

Are you trying to lose weight and wondering how alcohol affects the process?

Should you include alcohol in a weight loss plan?

I’m going to answer those questions for you in this video.

Hi, this is Ivana.

Welcome to my channel.

I’m all about breaking through the BS of the fitness and nutrition industry and giving you practical evidence-based advice.

I’m going to do a deep dive into how does alcohol affect weight loss. You’ll know whether it can be part of your particular nutrition plan.

Make sure you stick around for the whole video, because I’m actually gonna take you through the calculations that you need to do if you do want to include alcohol in your program.

That’s a little bit of a clue in terms of my opinion of alcohol and weight loss.

And my answer is absolutely!

However, there are so many caveats here and I’m going to take you through those one by one. I want you to understand whether it can work for you or whether you should be limiting your alcohol intake.

Liquid Calories Are Easier To Consume

If you want to lose weight, then you have to produce a calorie deficit and liquid calories are easier to consume.

Whether that means alcohol itself or alcohol mixed with juices or other things, it’s a lot easier to consume than eating food. For the same amount of calories, you’re going to be able to consume a lot more in liquid form than you would in food form, because you have to go through that process of chewing liquid calories or something that you want to limit in general, when you’re on a weight loss plan, because they automatically increase your calorie intake.

Alcohol Delays Burning Of Other Calories

One of the issues with alcohol is that it delays burning of other calories. The body treats alcohol as a poison, which essentially is, and that means that it becomes a priority and your body needs to burn off all the alcoholic calories before it shifts anything else.

If you’re trying to lose fat, then you’re going to have a more challenging process because your body needs to burn through all those alcohol calories before it gets to your fat stores. So your body is using either carbohydrates or fat for fuel and fat burning in particular is delayed when you’ve consumed alcohol.

That means your body has to work its way through all the alcohol calories, before it even attempt the extra body fat that you’ve got on your body. You can see how that can be an issue for alcohol and weight loss.

Alcohol also enhances your appetite and that’s certainly not something you want.

When you’re trying to lose weight, you need to get appetite under control. The more alcohol you’re drinking, the more likely you are to really crave other foods. Now, it all depends on how much you’re drinking. Of course, the more you drink, the more likely you might be to get into an intoxicated state where things are even a little bit more dicey. Because at that point, you probably care a lot less about what’s going on. You may decide to eat things that are not all that healthy, that are high in fat. And again, that fat is more likely to be stored because you’re also simultaneously consuming alcohol.

So your body is going to weight to burn off all those fatty foods that you’re eating until all that alcohol is burned off. So if you’re drinking a significant amount of alcohol and then having those fatty foods, you’re going to have a much harder time of burning.

Alcohol Is The Least Satiating Nutrient

Also, alcohol is also the least satiating nutrient. So it doesn’t fill you up.

You’re consuming these calories, but it doesn’t really make you feel full. In fact, it makes you feel kind of empty and that you want to eat more and more.

Like I said, it increases your appetite. So other things that kind of go against the process of weight loss.

Alcohol Affects Your Eating Behaviour Before & After Drinking

Now, to me, the most important thing is how does the alcohol affect your behaviour during and after?

So the first one is, are you eating more during the time that you’re drinking the alcohol and then what happens the next day? So, you know, if you’ve consumed too much alcohol, then the next day you might be tired and dehydrated, you might have a headache and you’re not feeling great.

What does that mean?

How does that affect your behaviour?

Are you going to be eating really healthy the next day?

Most people will have some sort of binge or their lazy food, whatever it is that they have whenever they can’t be bothered to do anything. You’re also probably going to have pretty minimal calorie expenditure on that day.

Chances are, if you’re a bit hung over, you’re going to spend a lot more time on the couch, rather than moving around and expending for the calories. You’re going to be reducing your calorie expenditure and that’s not great. So it’s already affecting your calories that day.

You may even skip your workout if you’re due for a workout. Then you’re missing that workout.

There’s that additional calorie burn, but even just being sedentary on the day after you’ve been drinking is going to reduce your calorie expenditure. It’s harder for you to get to the point where your body is starting to burn off fat.

You’re not going to have fat loss. If you’re in a hypercaloric state.

So you’re more likely to consume things that you wouldn’t otherwise.

You’re not able to maintain the discipline if, for lack of a better word. Cause I really don’t like nutrition to fall on discipline. It falls more on routines, but you don’t have the same kind of control that you might ordinarily have.

Lowering your inhibitions is going to change how you eat afterwards.

Many people have eating binges the day after drinking and it’s generally things that are really fatty for me. It used to be eggs and avocado and just a lot of, a lot of fatty stuff. But a lot of people will head straight to a McDonald’s or to some other fast food because they’re really tired and can’t be bothered. And then they’re craving those sort of greasy salty foods.

I know a lot of people are probably telling you that, “Oh, you can’t have alcohol at all.”

But as you’ve seen, you do need to make adjustments. You need to have this as a well-planned part of your nutrition.

Examples Of Alcohol And Weight Loss

I wanted to take you through some examples, so you can figure out how alcohol and the type of alcohol that you enjoy particularly can work into your plan.

I’m going to use myfitnesspal, which is just a calorie counting app.

This is Corona Extra and 330ml is this size. So that’s what we’re going to look for.

When we go into myfitnesspal, I’ve just brought it up here. So we’ve got Corona 330ml. It’s right there.

That’s not really even a big deal, right? That’s a small drink. And for me, I wouldn’t normally have more than two of those. So we’re talking 260 calories.

My Personal Approach With Alcohol And Weight Loss

For me, in terms of maintaining my leanness, maintaining my weight, I’m totally okay to have those once in a while. I don’t have it every day. If you’re looking at moderate and healthy consumption of alcohol, then generally it’s a 12 ounce beer. So something that’s just a little bit bigger than this.

One of those for women per day.

And for men, it would be two of those.

That would be considered normal, healthy, moderate consumption. If you prefer one, I’ve got one here. So five ounces of wine. So that’s a small glass would also be the equivalent. That’s your standard unit. So that means one glass for women and two glasses for men. 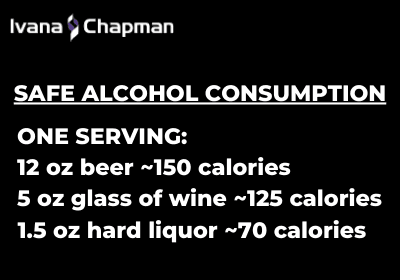 I’m actually going to take a look at that wine as an example as well, so that you can see the calorie intake there. Now wines can vary a little bit.

Whether it’s a white wine or rose or red wine, ideally you’re looking at the specific one that you’re actually consuming.

In this one, I’m going to have a search for Jackson Triggs. And it’s a Cabernet. If you look at that one, one serving Jackson Triggs 124 calories for that standard size unit, that five ounce. So that’s going to be a small glass that I’ve got up on the shelf.

One glass of wine, certainly after work is not a big deal, but again, you want to take into consideration the things I mentioned before, how does it affect your behavior? How are you going to feel and how will that change your eating behaviour afterwards?

Are you going to consume additional calories and end up in a calorie surplus?

That’s what you need to pay attention to when you’re striving for weight loss.

Now you don’t need to count in order to lose weight. If you’re interested in me doing a video, explaining why please do leave a comment comment below, and I will make that video for you.

The key thing is that you have some sort of awareness of the calories that you’re taking in on a regular basis. Remember that you can look up the information for whatever alcohol you choose to drink. Obviously the lighter choices that I’ve shown the beer and the wine, and perhaps the simple spirits like vodka are a lot easier to fit into a weight loss plan than all those mixed drinks like anything that’s mixed with juice or soft drinks. Your calorie intake is going to be a lot higher. And those things are really easy to drink too. It’s certainly a lot harder to fit them into a weight loss plan.

I hope you enjoyed this video today.

See you next week!

How To Know You’re In A Calorie Deficit

The Scary Part Of Weight Loss