Hi, it’s Ivana, helping you get fit healthy and strong at any age.

How Much Protein For Breakfast?

Your target for breakfast should be about 20 to 40 grams of protein. That’s the ideal amount for muscle protein synthesis. It’s okay to have a bit more if you like. And if you are a larger person who needs to take in more protein.

Now I’m gonna start with eggs because this tends to be the cooked staple that most people choose.

But there are a lot of options for eggs.

A single egg is only about six grams of protein, but if you add liquid egg whites, then you’re adding just pure protein to the mix. And that’s very easy, especially if you’re doing something like an omelet or an egg scramble. Now for either of those things, you can also add some lean meat in there. So maybe some lean Turkey sausage, or some chicken breast.

I’ve often used an egg scramble where I have the leftovers from the night before. So if I have leftover chicken breast leftover veggies, I just throw them in with the eggs. And then I’ve got myself a nice breakfast for that day. So I’ve got the protein coming from the eggs and sometimes egg whites as well. And then also the protein coming from the chicken breast. And there’s also another way where you can add a little bit of lean meat to another breakfast-like item.

Another egg option that I discovered a few months ago is egg muffins. Sometimes they’re called egg bites. Even Starbucks does these.

Now I bought some silicone muffin tins, and I’ve made these with black olives and spinach and feta cheese. 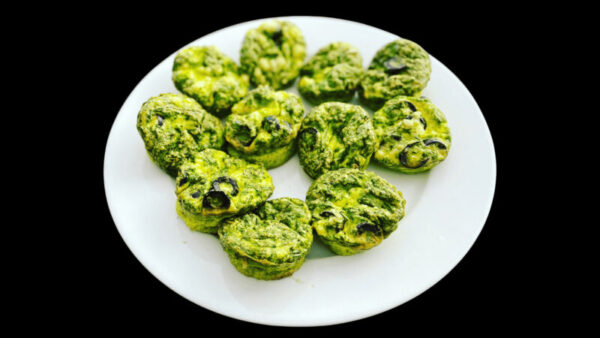 I’ve also tried them with cherry tomatoes and broccoli and shredded cheddar cheese. So you can prepare these in advance and you can store them in the fridge for several days, because if you’re really busy, you wanna be as prepared as you can be in the morning.

At least you can relax a little knowing that your breakfast is ready for you.

The next breakfast option is toast and cottage cheese.

So a lot of people are worried about carbs and particularly bread. And there’s no reason why bread can’t be part of a fat loss diet.

If you actually look at the label, a good whole grain bread, isn’t really that many calories and it can add fiber and protein to the meal.

This is the bread that we have here. It just happens to be something that my son likes and will eat pretty much every day. But if we check out the nutrition facts, it’s actually four grams of protein per slice. It’s telling you here, if you’re having the two slices, which is pretty much the serving size, you get eight grams of protein. So that’s pretty good. In fact, it’s more than oatmeal and people often think that oatmeal is a good protein source in the morning.

So cottage cheese is about 12 grams per half a cup. So you might wanna have three quarters of a cup of cottage, cheese, a little bit of protein from the bread, and then you can throw in a tomato or some avocado on top. And that can be a really satisfying breakfast.

Keep in mind when you’re having these breakfasts.

If you’re having, for instance, a latte that you make yourself at home. That’s what I tend to do. It’s a matcha latte with half a cup of milk, and I kind of foam that up and that’s seven grams of additional protein that I add to whatever I’m eating. So just a little bit of a bonus tip.

Another option is a yogurt bowl. This is something that I often have myself, three quarters of a cup of Greek yogurt has about 17 grams of protein. Then you can throw in about a quarter cup of almonds or some other nut for almonds.

It’s about seven or eight grams for that quarter cup. So in total you’ve got 24 or 25 grams of protein and that yogurt bowl, you can also put fruit in there just to add some fiber and some micronutrients and to make it taste really good. You can also sprinkle your yogurt bowl with chia seeds or flax seeds or something like that. Chia seeds give you a little bit of protein, but mainly they’re gonna give you a bit more fiber. I’ve also got this yogurt here.

This is the Greek yogurt. It’s 0% also lactose free. If that happens to be a concern for you and this one’s got this 17 grams for three quarters of a cup.

Now here’s an option that could be quite interesting and really satisfying in the morning, the breakfast burrito. Now, if you’re gonna do this, you wanna make sure that it’s a lower calorie version.

So you wanna keep the meat as lean as possible. Not add a lot of sauces.

You can add beans. That’s going to add a bit of protein.

Sometimes breakfast burritos are done with eggs. So you’re kind of combining the egg thing I talked about and putting it together into something that’s quite tasty. First thing in the morning, you also wanna add some veggies in there. It’s a bit more filling and you’ve got some fiber. If you’re gonna do this, you wanna focus on lean meat, so a lean chicken breast, or a lean Turkey sausage or something like that.

Just work out how much you’re adding to each breakfast burrito to make sure that you’ve got enough protein for that one serving.

The next option is oatmeal. Now I had oatmeal for breakfast for years every single day. So I’m not really that into it anymore, but I know a lot of people like to start their day with oatmeal, oatmeal itself doesn’t have that much protein.

It’s only five grams in half a cup of oatmeal.

Adding Yogurt Or Skyr For Protein

So you need to combine it with something in order to make it at high protein breakfast choice.

One thing you could do is add either Greek yogurt or Skyr. It’s an Icelandic type of yogurt. It has a similar profile to Greek yogurt. This one is also 0% for three quarters of a cup. This one has 20 grams of protein. So slightly more than the Greek yogurt.

The taste is a little bit different.

It depends on what you’re looking for and what you wanna mix it with. You have that 17 grams of protein from the yogurt. Or you could do a larger serving, and then you’ve got the five grams from the oatmeal. And you’ve got 22 grams there.

So at least you’ve hit your minimum.

You can also add fruit like strawberries or bananas or blueberries, or you can try a more exotic option like papaya.

That makes a really tasty and high protein option in the morning.

My last option is for those of you who are not that excited about eating in the morning: the smoothie or protein shake.

A lot of people use this when they’re really struggling to get the protein in. It’s easy to get a decent amount of protein. You’re also getting some liquids in first thing in the morning. Sometimes we wake up dehydrated and you just wanna get those fluids in there.

Just use your favorite protein powder.

I’ve recently done a video where you can choose the best protein powder for you.

So you might wanna check that out as well.

You can mix your protein in with either water or milk. The milk will give you a bit more protein as well. Fourteen grams in one cup. You can mix in the Greek yogurt and then have it with some fruit to make it a bit more palatable.

Hopefully these high protein breakfast options will keep you satisfied in the morning.

How To Minimize Weight Gain On Vacation

How To Stop Mindless Eating

Success at Fitness Competitions after Baby