Get Stronger, Flatter Abs By Healing Your Diastasis Recti 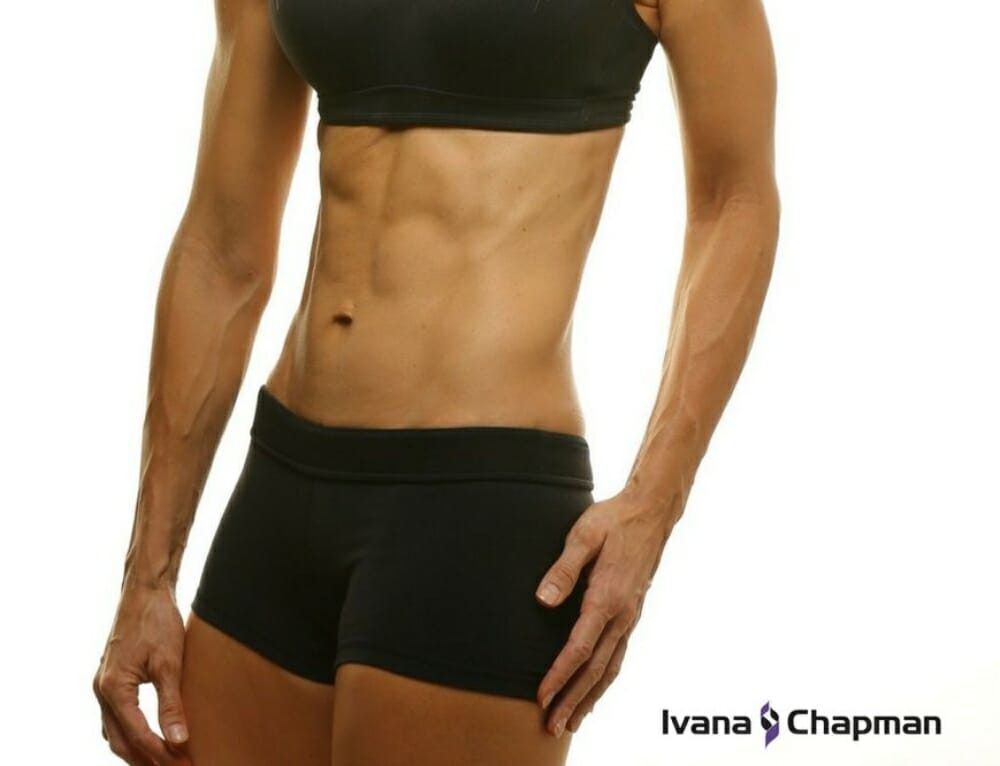 My abs nine months after having my son. Slight ab separation visible.

Strong, flat abs are the centrepiece of an athletic body, and you probably already know that what gets your abs looking lean is your nutrition plan. Yes, abs (at least when we mean the leanness of your abdominal area) are made in the kitchen.

There is one instance, however, when the appearance of your abs can be significantly impacted by something other than diet and that’s with Diastasis Recti. If you’re struggling to get your abs flat because of a bulge in your abdominals, a diastasis may be to blame. I’m going to tell you what a diastasis is, what you might be doing that’s making it worse (!), and what you can do to fix it.

Diastasis Recti (henceforth referred to as DR) is an abdominal separation at the linea alba, the connective tissue that joins the rectus abdominus (6-pack muscle) from side-to-side. 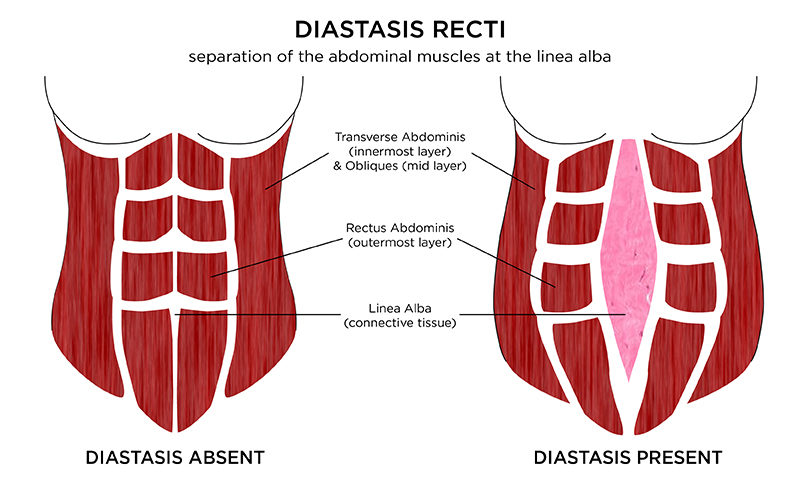 While most common in postpartum women, DR can also occur in babies (this is normally genetic) and some men.

With pregnancy, the risk of DR increases:

I developed DR in the second trimester of pregnancy and it took months of Physio and adapting my workouts to bring it back together. I re-injured it a few times with either heavy lifting or bending over and lifting my son when he was a toddler and weighed nearly 35 pounds.

DR is surprisingly common. Right now I have three clients who suffer from DR (including one man) so I thought it was about time I addressed the issue.

Certainly looks like Ronnie’s got a bit of abdominal separation there! Ronnie’s DR was likely caused by heavy lifting (Ronnie is one of the strongest bodybuilders ever), excessive abdominal exercise, and perhaps additional pressure in his abdominal area from drug use.

Most women have some degree of ab separation in the third trimester, and it takes about 8 weeks after childbirth for this condition to resolve. In many women (without treatment), it will remain and result in the appearance of a mummy-tummy, even when your child is a toddler or pre-schooler (and beyond!).

Do YOU Have It?

The main test for Diastasis Recti is to lie on your back with knees bent and do a small curl-up, while keeping your fingers in the area around your belly button. It’s best to have a physio or personal trainer who specializes in DR check it for you.

Anything greater than 2 fingers-width is considered DR, although fingers vary a bit in size. The strength of the muscle also makes a difference. In some cases, people have a small genetic separation, but if the area is strong it’s unlikely to become an issue.

Ironically, the traditional exercises that most people rely on to strengthen the abs, like planks and stomach crunches, can make DR worse. 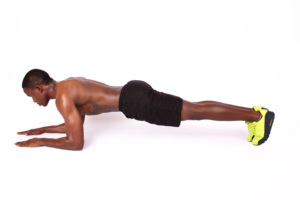 Skip the planks if you have DR!

Any time you’re increasing intra-abdominal pressure (the force generated in your abdominal cavity), you can re-aggravate the delicate tissue. If you have DR, it’s important to avoid lifting heavy weights in the downward position, including your children. That means that deadlifts and heavy squats are out, at least initially…and as long as a significant DR is present. The facedown position for exercise is generally a bad idea, and that includes push-ups/press-ups. Gentle, controlled exercises like Bird Dogs can be gradually introduced once some lower abdominal strength has been built up over several weeks.

Twisting actions, like supine bicycles, can also be harmful. V-ups, where straight legs are elevated, also put too much stress on abdominals with DR: 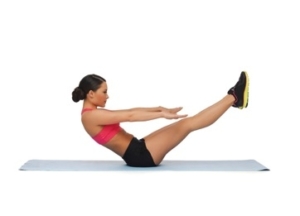 It always amazes me how yoga is so often recommended to pregnant and postpartum women. Pregnant women rarely need the additional flexibility that yoga provides. The hormone relaxin, which is released during pregnancy to prepare the body for childbirth, actually makes women more flexible. Doing too much stretching (as in many yoga classes) can increase the risk of injury and lead to unstable joints.

Women are often encouraged to do yoga in the post-partum period too, since it’s considered a “gentle” exercise. In truth, a progressive resistance training program that avoids unsupported forward flexion (bending forward without support) is much safer and will help heal the delicate abdominal tissues after childbirth. 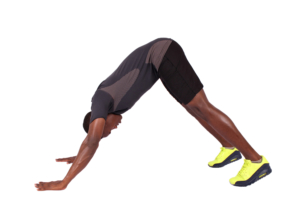 Downward Dog…not a good choice if you have DR

So deadlifts are out for at least a few weeks while I wear the fitsplint again during training to try to reduce the stress on the abs.

Uncorrected DR can lead to back pain and posture issues. Pelvic floor dysfunction can also result from DR. If a DR is large and a lot of pressure is exerted, a hernia (where the organs bulge out of the abdominals) can occur.

So don’t just think of it as a cosmetic issue. Untreated DR can have an impact on your functionality so don’t just ignore it.

How To Fix Diastasis Recti

Research is a little inconsistent in determining how effective physiotherapy exercises are for healing a DR. Most of the rehab techniques involve activation/contraction of the transverse abdominis (TVA), the innermost abdominal muscle. We often think of the TVA as the lower abs, but if you take a look at the position of the muscle you’ll notice that part of the TVA comes up quite high towards the ribs: 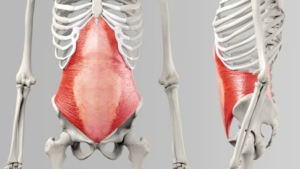 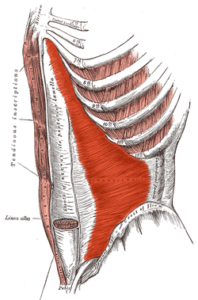 Exercises That May Help Diastasis Recti

I give my clients with DR a progressive TVA strengthening program, while avoiding any exercises that exacerbate the DR, like the planks/push-ups/deadlifts/crunches mentioned above.

Supine TVA Contraction – Lying on your back with knees bent and feet flat, gently contract the lower part of the abdominals by pressing the lower back towards the floor. Hold for 3 seconds, then release the lower back to neutral (slight arch in lower back). 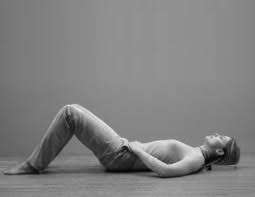 Supine TVA Foot Slides – In the same position, activate the TVA in the same way, then slide one foot out along the floor (while keeping hips from moving) while holding the contraction. Take a breath and then activate the TVA before repeating the process for the other leg.

Complete 3 sets of 30 seconds each. 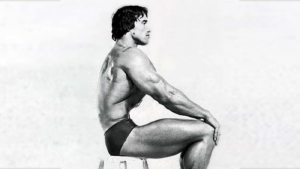 TVA Squat Against the wall – Sit back against a wall, feet bent at a 90° angle. Pull your belly button towards your spine. Release slightly, and then squeeze your abs in again and return to standing position (sliding up the wall). Squeeze your abs in again and bend your knees to 90°. Release the abs, contract again, and then slide up the wall again to standing position while maintaining the TVA contraction. 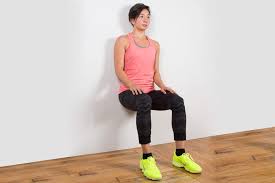 Some physios recommend a belly splint or some sort of binding in the first couple of months after childbirth, or when your DR has widened (I have done this a few times with heavy lifting…usually by lifting my son when he was a toddler!). While a splint can be useful in the postpartum period to take the stress off the tissues while they heal, it’s also important to avoid aggravating movements and do exercises to correct the DR at the same time. 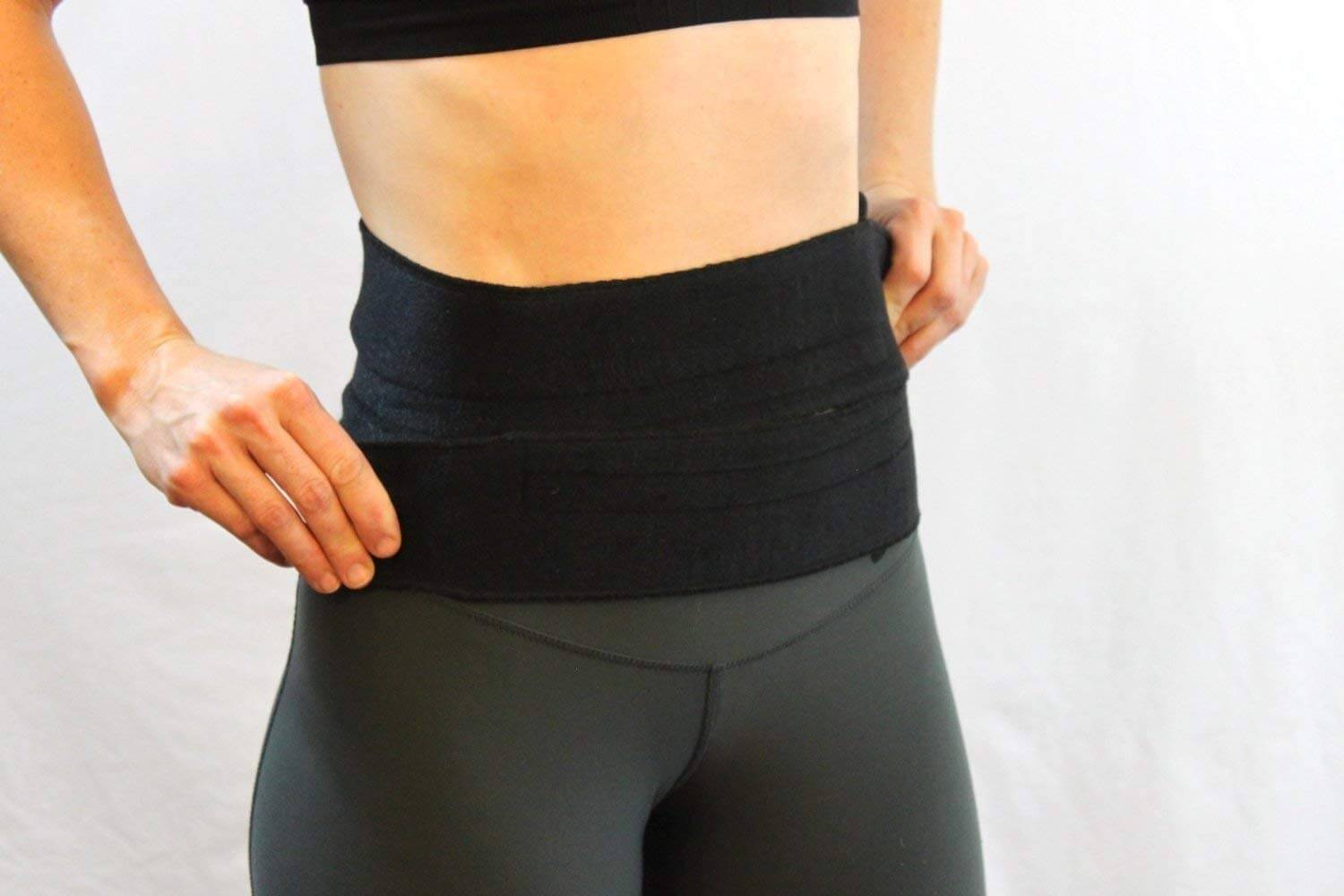 The Fitsplint, which I used for about 6 weeks shortly after giving birth to my son.

It’s important to avoid stressing the DR during your daily activities. For new moms, this means being very careful to lift your baby (and later, your toddler) close to the front of your body while activating engaging your abdominals. Training your TVA will make this easier to do naturally over time.

Getting Out Of Bed

Any time you’re lying down and want to get up, roll over to your side and push yourself up with one arm. Think about this the next time you want to get out of bed!

You want to avoid “jack-knifing” your body up at any time, whether your legs are up in the air or not (it’s even worse if they are).

This move is a really bad idea if you have DR!

If DR is very large and doesn’t respond fully to physiotherapy (this is unlikely if the exercises are done correctly for weeks or months), surgery can be an option. It’s unlikely that surgery will be necessary.

If you’re not successful on your own, work with a physiotherapist or fitness coach with expertise in DR to correct the issue (my Online Coaching program can help).

My son will be four this year and I no longer have a clinical DR, but my abs aren’t quite the same as they were before (not much is!).

I’m still careful to avoid planking and heavy deadlifts and squats, but I’m able to lift heavy in face up positions.

Healing your DR and strengthening your abs can help prevent further issues.

Be patient and consistent with your efforts and you’ll have strong abs again (or for the first time).

I Wish I Wasn’t a Fitness Freak

How I Learned to Appreciate My Body, Even if Others Don’t

How To Break The Diet Pattern