Are you over 35 and struggling to lose weight?

I’m going to go through some reasons why that could be happening and not one of them is related to your age.

Hi, this is Ivana, helping you get fit healthy and strong at any age.

There could be a lot of reasons why you’re not losing weight as you’re getting older.

And we know that it’s a little bit harder that you won’t be able to take in as many calories as you did when you were younger and perhaps more active as well. So I’m going to go through all the issues, but these are all fixable things.

Because obviously you can’t change your age. You can’t change the fact that he’s going to be a little bit more difficult. But you can do the best that you can, whatever age you are.

You’re Not Moving Around Very Much

And the first reason is that you’re not moving around very much.

Now, this is one of those things that you don’t notice happening to you. You might be sitting at your desk all day long, and whether that’s in an office or working from home, you’re not up and around throughout the day.

So you’re missing out on a lot of opportunity for activity that burns calories. If you want to lose weight, you need to produce a calorie deficit.

Your total daily energy expenditure is equal to BMR plus NEAT plus TEFF. Plus any exercise that you do. 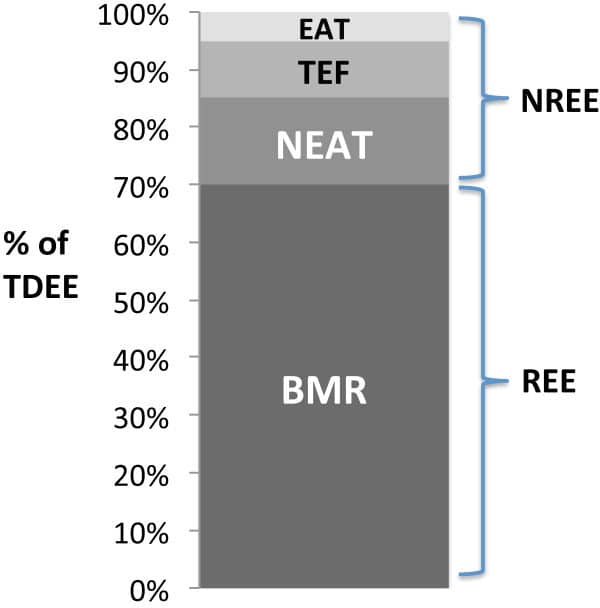 Not moving around very much is related to NEAT, non-exercise activity thermogenesis.

So that’s the things that you’re doing throughout the day. Just moving around, tidying up. It’s the difference between standing and sitting and then lying down. So if you’re standing, you’re burning off slightly more calories than if you’re sitting, there’s also fidgeting.

Some people will fidget more than others, and it’s not really that you want to encourage yourself to fidget more. But those people who tend to fidget have actually been found to burn off more calories. If you’re like myself working from home, and the only walking you’re doing is normally just to the bathroom or to get a snack.

And then you’re missing out on a lot of opportunity to burn off calories.

This is also why two people who are doing the same workout program, who are eating just about the same thing, might have different levels of weight loss. If somebody is moving around all day long in their work, for instance, and another person is constantly sedentary behind a desk just typing and then getting up occasionally, then they’re not going to burn off as many calories.

So in order to lose a bit more weight, try to move around more often. Work it into your routine, walk to work, if you can, and do more things standing when you can.

You’re Eating More Than You Think

The next reason why you might not be losing weight is you’re eating more than you think. Now, lots of people have a light sensible breakfast, a reasonable lunch, a kind of balanced dinner, and then the night hits.

And all of a sudden they’re scrounging around and they’re getting chips or they’re getting ice cream or whatever is hanging around in either the cupboards or in the fridge or in the freezer. And all those calories are piled on anything that you have a craving for because you’ve eaten reasonably, but maybe you haven’t eaten quite the right things in order to balance your cravings in the evening.

Or it may just be a psychological thing where you’re used to having snacks in the evening after your dinner. And you need to get out of pattern where you maybe have one of these people who’s constantly grazing throughout the day. And you’re not sure about what you’re eating. Those calories can really add up.

Once we hit about 35, we’re going to lose about half to 1% of our muscle mass per year. If we don’t do anything to maintain it.

So if you’re not doing any type of strength training, you’re not challenging your muscles, then you’re going to start to lose that. And that means you’re going to have a slight decrease in your resting metabolic rate because muscle is more metabolically active than fat.

More importantly, if you have more muscle and you’re more fit, you’re more likely to move around. So you’re going to get an increase in neat, because you’re not going to be lying on the couch as much. And you’re probably going to put more effort into your exercise as well. You’re more likely to be exercising in the first place. If you’re a person who has muscle and feel stronger and more energetic, all of those things together increase your calorie expenditure, and that helps you lose weight.

Now I’ve often said this as weight training, and then I have had many people ask me, is it okay to do body weight exercises?

Because obviously that can be challenging.

And yes it is.

But the important thing is that you’re gradually increasing either the sets or the reps, maybe even the duration that you’re using, those exercises you could be doing. Isometric holds all of those things further, stimulate the muscles to grow. And then of course, for things like squats and deadlifts and lunges, you can add weight directly as well. So dumbbells or a barbell, Once you get strong enough to do those things.

In order to maintain and build muscle, you need two things.

You need to do weight training or strength training. As we just talked about that provides the stimulus. And you need to get adequate protein in order to help the muscles recover and grow. You won’t get maximum benefit unless you do both of those things. You need that stimulus in order for your muscles to grow, but the protein will help you maintain the muscle that you have, especially if you are dieting. While reducing your calories and producing a calorie deficit, the protein is going to aid in muscle retention.

So how much protein is enough?

As we get older, our bodies are not able to utilize the protein as efficiently so we need more.

So I normally give a range of 0.7 to 1.0 grams of protein per pound per day. If you’re 170 pounds, then up to 170 grams of protein per day. So if you’re 35 or older, I definitely recommend going on the higher side of that range. You might be doing that kind of standard bodybuilding thing, that one gram per pound. So whatever your body weight is in pounds, that’s what you’re going to have in protein in grams.

You want to make sure that you’re getting that protein consistently so that you’re maintaining your muscle and then it as well.

Now I’m not saying that you can’t lose weight with keto or intermittent fasting or clean eating or any popular diet you can. But the important thing is that that diet also allows you to produce a calorie deficit. So oftentimes (I’ll use clean eating as the example here) people will think that just because they’re eating clean, whatever that exact definition is. And there isn’t a scientific one for that anyway. But if they’re eating clean, they think then that’s fine. That they’re always going to be okay. They’re always going to keep losing weight.

And initially they might, because if they’re eating a lot of highly processed refined foods. They’re having hamburgers, hot dogs muffins on a regular basis. If you just eliminate all those things, you’re taking out a ton of calories.

So at the beginning, it seems quite easy to produce that calorie deficit.

How Clean Eating Can Fail

The first issue happens because you might not sustain clean eating anyway. So you’re throwing in a whole bunch of stuff. Perhaps you’re having several cheat meals and then you’re boosting the calories quite high again, and you’re going to end up not losing weight.

The other thing is that clean eating itself, even if you’re eating what we consider healthy whole foods all the time, you can still overeat. You can still be in a calorie surplus and not lose weight, or even put on weight while doing clean eating.

Because there are a lot of calorie dense foods that are very healthy for you, in many respects. Things like nuts are very calorie dense. And if you’re eating tons of those kinds of things, or lots of bread with lots of olive oil.

These are things I used to do. So I just give the example. When I did clean eating, I had a hard time losing weight. Because I picked all these really healthy foods, but I ate so much of them that I was never able to lose weight.

It also has to be sustainable. So are you really going to be able to maintain clean eating for six months. Or two years without getting off track?

Would You Do Keto Long Term?

The same goes for keto. Are you really willing to give up carbs for so long? What usually happens is that people will initially lose weight and then they just kind of go off the rails because that diet is not sustainable for them.

Keto in particular, I think is quite challenging because a lot of us love our carbs. And just the fact that you’re eating mostly protein and fat doesn’t mean that you’re going to be in a calorie deficit and you do need that to lose weight.

It’s the scientific principle. If you’re not in a calorie deficit, you won’t lose weight.

Getting Into A Calorie Deficit To Lose Weight

So some people get into a calorie deficit by following a particular plan (whether it’s keto or intermittent fasting or clean eating or vegan). Those diets allow some people to get in a calorie deficit. And if you’re able to maintain those calories over time, then you’re going to be successful with that diet, but you don’t need to do any of those diets in order to lose weight.

All you need to do is manage your calorie intake. Enjoy some of the foods that you love in smaller quantities, less frequently than you are already. And then you can get yourself into a calorie deficit and lose weight.

If that sounds good to you, and you want to escape from fad dieting, I’ve released a course where I use evidence-based nutrition in order to achieve weight loss results. Please hit the like button. If you’ve learned something today. And make sure to subscribe and hit the bell if you’re interested in evidence-based weight loss information,

Weight Loss Mistakes That Beginners Make In Their 30s And 40s

Diet And Lifestyle Changes For Acid Reflux And GERD

The Secret Of Motivation That Nobody Wants You To Know

Why I ran my first (and only) Marathon