Can Diastasis Recti Be Fixed?

I’ve done a couple of videos about diastasis recti. They’re both very popular.

There wasn’t much out there for men.

It’s something that’s always been associated with postpartum women, even though women who’ve never had babies can also have DR.

And men can suffer from it as well. I had a few male clients who had it, and they’d never even heard about it. Some of my female clients had it as well. And I had it myself after my pregnancy.

Can Diastasis Recti Be Fixed?

In the comments of those videos. A lot of people have been asking me, “Can diastasis recti be fixed?”

I’m a certified strength and conditioning specialist. And I have over 20 years of experience in the fitness industry.

I became quite an expert on TVA exercises, which is really the main thing that suggested by physiotherapists.

There’s not a lot of research on the effectiveness of exercises for DR.

So we have to go by the clinical experience of the therapist and the coaches who work with people with diastasis recti.

What TVA Exercises Do To Fix Diastasis Recti

Now, the thing with these exercises, you’re working the inner abdominal muscle. It helps to stabilize the pelvis. It may help to support your lower back and by pulling in those muscles, you take some of the stress off that separation. So the separation that you get is of the Linea Alba in the center of your rectus abdominis. 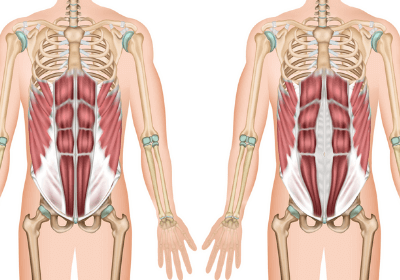 But the exercises that you’re doing are for the muscle underneath the innermost muscle, the rectus abdominis. They strengthen that area.

People will argue about whether it’s possible for the DR to repair itself. Whether that separation can be fixed.

Can Diastasis Recti Be Fixed In Postpartum Women?

In postpartum women, it’s more likely, mainly because we have this hormone that entered our body called relaxin. Which, in the last trimester issupposed to help open things up to deliver the baby. So it helps loosen up ligaments and connective tissue. Once the baby is born, the relaxin leaves, and you go back to sort of your normal state.

If you’ve had a baby, and then afterwards, that hormone is taken away and things start to tighten up. It’s conceivable that you may be able to bring it back together.

And I’ve seen it in female clients. After their baby’s born, they do exercises, they get some support.

So sometimes you’ll wear a DR band just to give it a little bit more support. And then you’re able to close that gap a little bit.

I don’t have a complete closure of my gap. I still have a little space in between. But the connective tissue is now strong enough so that I can do a lot of the exercises that I’ve mentioned in my video.

Things that you shouldn’t be doing with diastasis recti, so planks or pushups and anything where there’s a lot of forward pressure. Or a lot of intra abdominal pressure. So really heavy lifting deadlifts and squats can put a lot of pressure on it.

DR is more common in men who are older, the strength of our connective tissue reduces as we get older, our bodies don’t produce as much collagen.

So as we get older, we don’t have as much of that tissue holding things together.

Now I’ve had a couple of young men comments and say, “Oh, I’m in my twenties. And I’ve got DR. Like, can I do something about it?”

I think in that case, it may be possible. Because not only is there a tissue naturally stronger and they’ve probably gotten it through a combination of genetics and probably over-exercising in some way. So they might’ve been doing just excessive forward flexion. A lot of crunching, like over-training and not always with the best technique. And that’s often the reason that young men get that issue.

In older men, it may or may not be the case. It’s often the weakening tissue. And then if you do put on weight or you’re overweight or obese. And you have a lot of belly holding forward, that puts a lot of stress on the rectus abdominis.

Sometimes if you can get that weight off and then you’re lean again. If your stomach is flat, you’re not placing pressure on that rectus abdominis anymore. Whether or not that gap is going to close once you do that. I don’t know. There’s no way for me to know.

As I said, I’m not a doctor or a physical therapist.

I know a lot of surgeons basically believe that once it’s open, it’s going to be hard to close it. Especially in an older man or perhaps an older woman who has DR. It may not come together without surgical intervention.

I really hate to be negative about this because I have seen people who’ve improved and myself. I’ve been able to get it to a good position where I’m comfortable with it.

The Size Of The DRA Gap Matters

If you have a small gap, chances are you’ll be able to get the tissue strength back.

If you have a very large gap, it seems like it would be less likely for that to be happening.

Get A Diastasis Recti Diagnosis

But first of all, you need to make sure that you get diagnosed with diastasis recti by your doctor or by a physical therapist. So you know, that that’s what you’re dealing with. Cause there could be other things at work here.

You need to get the opinion of a doctor, a surgeon, a physical therapist on your particular situation.

A lot of people have asked me, “What do you think?”

And I have no way of knowing. I only have my experience, the experience of my clients and what I’ve read and heard. I like to be as positive as I can with these sorts of things, but I also don’t want to give anyone false hope.

But I hope I’ve given you a reasonable enough breakdown so you understand what’s at play here. As with most things in medicine, it’s best to try a conservative approach first, (in this case, two to three months of TVA exercises) before looking at other (surgical) solutions.

How To Stop Easter From Screwing Up Your Nutrition Plan

Stop Obsessing About Numbers on the Scale

In A Calorie Deficit But Not Losing Weight